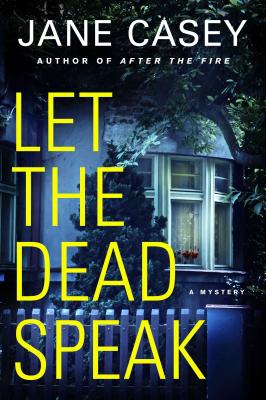 This is book number 7 in the Maeve Kerrigan Novels series.

"Casey is a true craftswoman, a writer who beguiles one through the most twisted of plots with a confident and seductive hand.
Let The Dead Speak is sharp, complex and gripping to the very end"
Alex Marwood, bestselling author of Wicked Girls and The Killer Next Door

When eighteen-year-old Chloe Emery returns to her West London home she finds her mother missing, the house covered in blood. Everything points to murder, except for one thing: there’s no sign of the body.

London detective Maeve Kerrigan and the homicide team turn their attention to the neighbours. The ultra-religious Norrises are acting suspiciously; their teenage daughter and Chloe Emery definitely have something to hide. Then there’s William Turner, once accused of stabbing a schoolmate and the neighborhood’s favorite criminal. Is he merely a scapegoat, or is there more behind the charismatic façade?

As a body fails to materialize, Maeve must piece together a patchwork of testimonies and accusations. Who is lying, and who is not? And soon Maeve starts to realize that not only will the answer lead to Kate Emery, but more lives may hang in the balance.

With Let the Dead Speak, Jane Casey returns with another taut, richly drawn novel that will grip readers from the opening pages to the stunning conclusion.

"As always with Casey’s novels, the feisty Maeve Kerrigan holds the center and fascinates us as often as she infuriates us. She combines ambition and insecurity. She’s smart, funny and second guesses herself at every turn. It’s a highly seductive mixture. The Jane Casey mysteries are intricate, potent and powerful. Let the Dead Speak is one of her best.”
--Open Letters Monthly

"The intricate plot unfolds naturally, as Casey never lets readers stray from Kerrigan’s point of view, so that they feel as if they are figuring it all out with her in this increasingly dark and tragic story”
-- Publishers Weekly (starred review)

“These character-driven Kerrigan mysteries are among the genre’s finest, and the last page here is likely to leave readers breathless and longing for Casey’s next.”
--Booklist (starred review)

“Both suspense and emotion run high in this compelling, more somber, addition to the character-driven Maeve Kerrigan mysteries. Casey sets the bar higher each time out, but she never has trouble clearing it.”—Booklist (starred review) on After the Fire

“A thrilling crime novel perfectly combining the detail of a police procedural and high-interest characters. This combination and the smooth pacing make for a book that’s impossible to set down…This is an exciting book guaranteed to satisfy the most finicky fans of mystery and suspense.”—RT Book Reviews (4½ stars) on The Kill