Among the Ruins: A Mystery (Rachel Getty and Esa Khattak Novels #3) (Paperback) 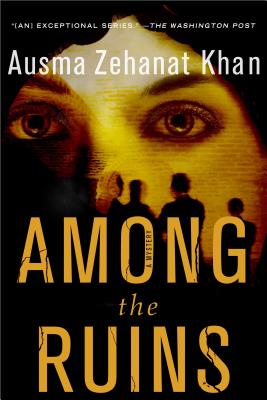 This is book number 3 in the Rachel Getty and Esa Khattak Novels series.

“Iran’s stormy history is the atmospheric backdrop for Ausma Zehanat Khan’s Among the Ruins, the third book in her exceptional series featuring Esa Khattak…The story takes on the air of a James Bond movie, including an explosive finale on the Caspian Sea.”—The Washington Post

On leave from Canada’s Community Policing department, Esa Khattak is traveling in Iran, reconnecting with his cultural heritage and seeking peace in the country’s beautiful mosques and gardens. But Khattak’s supposed break from work is cut short when he’s approached by a Canadian government agent in Iran, asking him to look into the death of renowned Canadian-Iranian filmmaker Zahra Sobhani. Zahra was murdered at Iran’s notorious Evin prison, where she’d been seeking the release of a well-known political prisoner. Khattak quickly finds himself embroiled in Iran’s tumultuous politics and under surveillance by the regime, but when the trail leads back to Zahra’s family in Canada, Khattak calls on his partner, Detective Rachel Getty, for help.

Rachel uncovers a conspiracy linked to the Shah of Iran and the decades-old murders of a group of Iran’s most famous dissidents. Historic letters, a connection to the Royal Ontario Museum, and a smuggling operation on the Caspian Sea are just some of the threads Rachel and Khattak begin unraveling, while the list of suspects stretches from Tehran to Toronto. But as Khattak gets caught up in the fate of Iran’s political prisoners, Rachel sees through to the heart of the matter: Zahra’s murder may not have been a political crime at all.

From Ausma Zehanat Khan, the critically acclaimed author of The Unquiet Dead and The Language of Secrets, comes Among the Ruins, another powerful novel exploring the interplay of politics and religion, and the intensely personal ripple effects of one woman’s murder.

AUSMA ZEHANAT KHAN holds a Ph.D. in International Human Rights Law with a specialization in military intervention and war crimes in the Balkans. She has practiced immigration law and taught human rights law at Northwestern University and York University. She is the former Editor in Chief of Muslim Girl magazine, the first magazine targeted to young Muslim women. Khan currently lives in Colorado with her husband. The Unquiet Dead is her first novel.

Praise for The Language of Secrets

"As much an examination of the complicated social, political and religious aspects of the war against terrorism as it is a crime procedural. It also offers readers an introduction to Arabic poetry and fascinating details about Khattack’s and Getty’s personal lives. These colorful threads complement the bigger storylines.”—The Washington Post

“With its thought-provoking, intelligent plot, The Language of Secrets even surpasses Khan's superb debut, The Unquiet Dead. The Language of Secrets delivers a powerful insight into the Muslim community, exploring those who are peace-loving and proud of their heritage as well as those whose pride transforms into violence....An action-packed police procedural complemented by strong characters with believable motives.”—Associated Press

“Part of the search hinges on Khattak’s knowledge of Arabic poetry, but this isn’t a puzzle mystery; rather it is a novel of character and mores, and an exceptionally fine one…A heartfelt novel for lovers of crime fiction and anyone interested in the complexities of living as a Muslim in the West today.”—Library Journal (starred review)

Praise for The Unquiet Dead

“Impressive...Khan’s talents are evident. This first in what may become a series is a many-faceted gem. It’s a sound police procedural, a somber study of loss and redemption and, most of all, a grim effort to make sure that crimes against humanity are not forgotten.”—The Washington Post

“The Unquiet Dead blazes what one hopes will be a new path guided by the author's keen understanding of the intersection of faith and core Muslim values, complex human nature and evil done by seemingly ordinary people. It is these qualities that make this a debut to remember and one that even those who eschew the genre will devour in one breathtaking sitting.”—The LA Times

“This is Canadian-born Khan’s first novel and what a debut it is!...Khan knows her subject, knows her hometown, and knows how to keep the suspense building. This is a writer to watch.”—The Globe and Mail

“Compelling and hauntingly powerful. Readers of international crime fiction will be most drawn to the story, but anyone looking for an intensely memorable mystery should put this book at the top of their list.”—Library Journal (starred review, Debut of the Month)