Murder at the Brightwell: A Mystery (An Amory Ames Mystery #1) (Paperback) 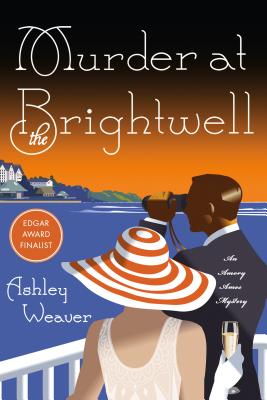 This is book number 1 in the An Amory Ames Mystery series.

A delightful read for Rhys Bowen and Agatha Christie fans! Amory Ames married a playboy, and her ex-fiance Gil wants her help to keep his sister from making the same mistake. Amory leaves her rakish husband behind and sets off for The Brightwell Hotel. When Gil is accused of murdering his sister's fiance, Amory decides to clear his name. Intriguing characters, playful banter, and an engaging mystery make this book a real treat. - John

Shortlisted for the Edgar Awards

Ashley Weaver’s debut mystery, Murder at the Brightwell, is a delicious, stylish novel in which murder invades British polite society and romance springs in unexpected places, and a wonderful testament to the enduring delight of the traditional mystery.

“It’s more terrible than you think, Mrs. Ames. It appears that Mr. Howe was murdered.”

Amory Ames, a wealthy young woman questioning her marriage to her notoriously charming playboy husband, Milo, is looking for a change. She accepts a request for help from her former fiancé, Gil Trent, not knowing that she’ll soon become embroiled in a murder investigation that will not only test her friendship with Gil, but also will upset the status quo with her husband.

Amory accompanies Gil to the luxurious Brightwell Hotel in an attempt to circumvent the marriage of his sister, Emmeline, to Rupert Howe a disreputable ladies man. There is more than her happiness at stake, however, when Rupert is murdered and Gil is arrested for the crime. Matters are further complicated by Milo’s unexpected arrival, and as the line between friend and foe becomes less clear, Amory must decide where her heart lies and catch the killer before she, too, becomes a victim.

Also out now in the Amory Ames mysteries: Death Wears a Mask and A Most Novel Revenge

“With a profound nod to the Golden Age of the British whodunit, Weaver creates a classic mystery, complete with a fashionable setting, a cast of upper-crust Brits and witty prose.” —Richmond Times-Dispatch

“Murder at the Brightwell is an elegant Christie-esque 1930s romp that will delight fans of Rhys Bowen's Lady Georgie series with its wit, charm, and strong independent heroine. With its dash of romance, Amory Ames and her rakish husband Milo might just be the new Nick and Nora Charles.” —Deborah Crombie, New York Times bestselling author of To Dwell in Darkness

“If you love Downton Abbey, you'll adore Ashley Weaver's charming debut novel, set amidst the upper-crust of British society at a posh seaside resort in the 1930s. There are handsome cads, gorgeous gowns, and red herrings galore as our winsome heroine Amory Ames puts all the clues together to find the murderer--as well as love.” —Susan Elia MacNeal, New York Times-bestselling author of the Barry Award-winning Maggie Hope series.

“Ashley Weaver's debut novel delivers the goods--an appealing heroine, an abundance of suspects and enough red herrings to satisfy the most demanding of readers--all rendered with an expert hand.” —Carol K. Carr, national bestselling author of the Madame of Espionage mysteries

“A witty and charming debut mystery with a believably spunky sleuth and a compelling story of love that never runs smoothly. I was caught up by the author's subtle humor and gift for dialogue. I hope we see more of Amory Ames in the future.” —G.M. Malliet, Agatha Award-winning author of the St. Just and Max Tudor mysteries

“An engaging mystery that kept me guessing right up to the end. I especially enjoyed the playful and at times snarky banter between Amory and Milo, which had me rooting for them not only to solve the murder, but to realize how perfect they are for each other. I hope they will continue on in the vein of Nick and Nora Charles, for I would happily follow them on the trail of future mysteries!” —Jennifer Delamere, author of An Heiress at Heart

“A posh hotel that specializes in good wines, fine foods, and servants that cater to every whim in this charming period piece will appeal to Downton Abbey fans.” —Odine H. Cogdill, Fisher Island Magazine