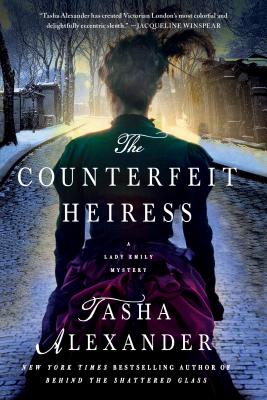 This is book number 9 in the Lady Emily Mysteries series.

This is my hands-down favorite historical mystery series! If
you've never read Tasha Alexander before, she's a master at writing
the series so you can jump in here and won't feel lost at all. A
young woman is found murdered after posing as the eccentric heiress
Estella Lamar. Cécile is worried about her childhood friend Estella,
and asks Emily and Colin to find out if the murdered impostered is
linked to Estella. The group dynamic in this one is a blast as Emily,
Colin, Cécile, and Jeremy try to solve the mystery together. Between
chapters you get pieces of Estella's story, loosely inspired by the
real life of Huguette Clark. And for Elizabeth Peters fans, there's a
nod to the Amelia Peabody books in The Counterfeit Heiress.

In Tasha Alexander's novel The Counterfeit Heiress, after an odd encounter at a grand masquerade ball, Lady Emily becomes embroiled in the murder investigation of one of the guests, a sometime actress trying to pass herself off as the mysterious heiress and world traveler Estella Lamar. Each small discovery, however, leads to more questions. Was the intended victim Miss Lamar or the imposter? And who would want either of them dead?

As Emily and Colin try to make sense of all this, a larger puzzle begins to emerge: No one has actually seen Estella Lamar in years, since her only contact has been through letters and the occasional blurry news photograph. Is she even alive? Emily and Colin's investigation of this double mystery takes them from London to Paris, where, along with their friend Cécile, they must scour the darkest corners of the city in search of the truth.