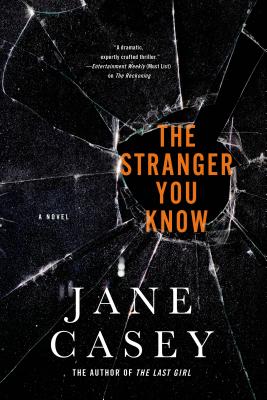 This is book number 4 in the Maeve Kerrigan Novels series.

He meets women. He gains their trust. He kills them. That's all London police detective Maeve Kerrigan knows about the man she is hunting. Three women have been strangled in their homes, and it appears to be the work of the same sadistic killer. With no sign of break-ins, every indication shows that the women let their attacker in willingly. The victims' neighbors and friends don't seem to remember anything unusual or suspicious, and Maeve is almost at a loss about how to move forward with the investigation.

Then the evidence starts to point to a shocking suspect: DCI Josh Derwent, Maeve's partner on the police force. Maeve refuses to believe he could be involved, but how well does she really know him? Secrets Derwent has long kept locked away are coming back to haunt him, and the more Maeve learns about her partner's past, the more difficult it is to dismiss him as a suspect. After all, this is hardly the first time Derwent's been accused of murder.

Jane Casey returns with her most outstanding novel yet in The Stranger You Know, a taut thriller and an intimate portrayal of complicated, all-too-human characters.

“[An] exciting thriller…Casey's growing fan base will snatch up the latest entry in what has turned out to be a can't-wait-for-the-next-one series.” —Library Journal

“Maeve Kerrigan [is] a fascinating and plausible character…She is no superwoman, she lacks supernatural acuity, and she doesn't even have so much as a single dragon tattoo. What she has is persistence, integrity and emotional intelligence, and a very deft way of insinuating herself into a reader's affections.” —The Irish Independent (UK)

“The Maeve Kerrigan [novels are] all solid procedurals with exceptionally well-drawn characters whose relationship continue to develop in each entry. Derwent, a brilliant copper in Maeve's eyes despite his numerous personality defects, serves as a foil and balance for her, and, with him at the center here, this novel attains further complexity in the interplay of the police-force members. Prime crime fiction.” —Booklist (starred review)

“A captivating police procedural heavy on characterization that will keep readers up late into the night. Maeve is a character to love; she's easy to relate to as she holds her own with humor and snappy dialogue. The voice of the novel is unique and captivating.” —RT Book Reviews (4½ stars)