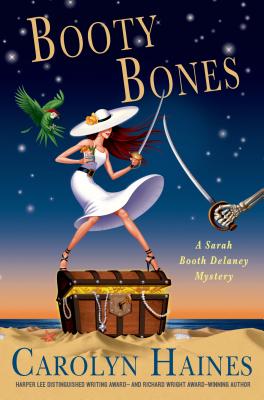 This is book number 14 in the A Sarah Booth Delaney Mystery series.

Sarah Booth Delaney's fiancé, Graf Milieu, has become depressed while recovering from a severe leg injury, but Sarah Booth knows just how to help him heal. She's arranged a romantic getaway for the two of them at a lovely beach cottage on Dauphin Island off the Gulf Coast. On the first day of their island adventure, they take a historical tour led by Angela Trotter, a young woman well-versed in local lore, including rumors of pirate treasure hidden somewhere on the island. In fact, Angela confides to Sarah Booth and Graf that her father, a sailor and treasure hunter, was murdered just when he thought he was closing in on the treasure. Angela's convinced that the wrong man was imprisoned for her father's murder, and she manages to persuade Sarah Booth to take the case. And Sarah Booth soon realizes that there's much more going on than meets the eye. With untold amounts of treasure offering plenty of motive for murder and a fiancé falling deeper into depression, Sarah Booth's peaceful island vacation is quickly spinning out of control.

In Booty Bones, Carolyn Haines will once again delight readers with her trademark blend of clever plotting, witty prose, and Southern charm.

Carolyn Haines is the USA Today bestselling author of the Sarah Booth Delaney mystery series and a number of other books in mystery and crime, including the Pluto's Snitch paranormal-historical mystery series, and the Familiar Legacy romantic suspense series featuring Trouble the black cat detective. She is the recipient of the Harper Lee Award for Distinguished Writing, the Richard Wright Award for Literary Excellence, and the Mississippi Writers Guild Lifetime Achievement Award. She is a former journalist, bartender, photographer, farmhand, and college professor and lives on a farm where she works with rescue cats, dogs, and horses.

“[Haines] delivers a riveting love story alongside the mystery, leaving her readers in hot anticipation of her next novel.” —Mississippi Magazine