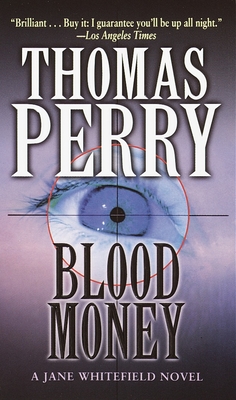 This is book number 5 in the Jane Whitefield series.

"Thomas Perry just keeps getting better," said Tony Hillerman, about Sleeping Dogs--and in this superb new novel by one of America's best thriller writers, Jane Whitefield takes on the mafia, and its money.

Jane Whitefield, the fearless "guide" who helps people in trouble disappear, make victims vanish,has just begun her quiet new life as Mrs. Carey McKinnon, when she is called upon again, to face her toughest opponents yet.  Jane must try to save a young girl fleeing a deadly mafioso.  Yet the deceptively simple task of hiding a girl propels Jane into the center of horrific events, and pairs her with Bernie the Elephant, the mafia's man with the money.  Bernie has a photographic memory, and in order to undo an evil that has been growing for half a century,he and Jane engineer the biggest theft of all time, stealing billions from hidden mafia accounts and donating the money to charity.  Heart-stopping pace, fine writing, and mesmerizing characters combine in Blood Money to make it the best novel yet by the writer called "one of America's finest storytellers,"(San Francisco Examiner).

Thomas Perry won an Edgar for The Butcher’s Boy, and Metzger’s Dog was a New York Times Notable Book of the Year. His other books include The Face-Changers, Shadow Woman, Dance for the Dead, and Vanishing Act. He lives in Southern California with his wife and two daughters.

“Brilliant . . . Buy it: I guarantee you’ll be up all night.”
–Los Angeles Times


“It didn’t take long before I was hooked, totally immersed in the life of Jane Whitefield. . . . The plot takes one unexpected turn after another.”
–Austin American Statesman