Born of War (A Will Parker Thriller #2) (Mass Market) 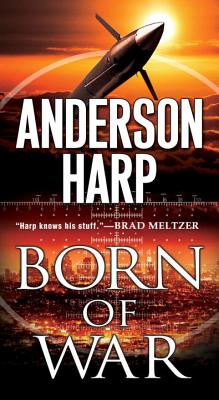 This is book number 2 in the A Will Parker Thriller series.

An unspeakable act of terror on American soil. A global surge of high-tech mayhem. An explosive new thriller from military veteran Anderson Harp.

The first target is a church in Mobile, Alabama. The bomb is a savage act of domestic terror that will earn the respect of jihadists across the world. Especially the deranged leader of Al Shabab. The bombing has also drawn the attention of the FBI, CIA, NSA--and special operative William Parker. Recovering from a tragic loss, Parker is not ready to return to active duty. But when he learns that the terrorists possess anti-ship missiles--he must destroythe enemy. . .or deal with the terrifying consquences.

Time is running out. Missiles are ready to launch. And the free world is just one madman away from total destruction.

Anderson Harp has served the United States Marine Corps in many capacities, from artillery to teaching mountain warfare and arctic survival. His military work has taken him from the Arctic Circle and Fort Greely, Alaska (where a typical day reaches 44 below zero) to the Persian Gulf, Central America, Europe, South Korea, and the Pentagon. As an officer in the Marine Corps Reserve, he was mobilized for Operation Enduring Freedom and served with MarCent's Crisis Action Team. Andy also chaired and was a member of the "first ever" USO Tour of ITWthriller authors to the Persian Gulf and participated in the 2012 Tour. He is the only author in the history of the USO to have participated in two Tours. His insights from the USO Tour appear on CNN's Larry King Live, Huffington Post, NewsMax, and The Big Thrill among others. Visit his website at andersonharp.net.

"Tense and authentic--reading this book is like living a real-life mission."--Lee Child

"Reminds me of Tom Clancy at his finest."--James Rollins