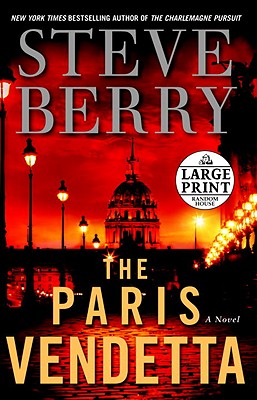 When Napoleon Bonaparte died in exile in 1821, he took to the grave a powerful secret. As general and emperor, he had stolen immeasurable riches from palaces, national treasuries, and even the Knights of Malta and the Vatican. In his final days, his British captors hoped to learn where the loot lay hidden. But he told them nothing, and in his will he made no mention of the treasure. Or did he?
Former Justice Department operative Cotton Malone isn't looking for trouble when it comes knocking at his Copenhagen bookshop. Actually, it breaks and enters in the form of an American Secret Service agent with a pair of assassins on his heels. Malone has his doubts about the anxious young man, but narrowly surviving a ferocious firefight convinces him to follow his unexpected new ally.
Their first stop is the secluded estate of Malone's good friend, Henrik Thorvaldsen. The wily Danish tycoon has uncovered the insidious plans of the Paris Club, a cabal of multimillionaires bent on manipulating the global economy. Only by matching wits with a terrorist-for-hire, foiling a catastrophic attack, and plunging into a desperate hunt for Napoleon's legendary lost treasure can Malone hope to avert international financial anarchy.
But Thorvaldsen's real objective is much more personal: to avenge the murder of his son by the larcenous aristocrat at the heart of the conspiracy. Thorvaldsen's vendetta places Malone in an impossible quandary one that forces him to choose between friend and country, past and present. Starting in Denmark, moving to England, and ending up in the storied streets and cathedrals of Paris, Malone plays a breathless game of duplicity and death, all to claim a prize of untold value. But at what cost?

"From the Hardcover edition.

Steve Berry is the "New York Times" and #1 internationally bestselling author of "The Lincoln Myth, The King s Deception, The Columbus Affair, The Jefferson Key, The Emperor s Tomb, The Paris Vendetta, The Charlemagne Pursuit, The Venetian Betrayal, The Alexandria Link, The Templar Legacy, The Third Secret, The Romanov Prophecy, "and" The Amber Room." His books have been translated into 40 languages with more than 18,000,000 copies in 51 countries.

History lies at the heart of every Steve Berry novel. It s this passion, one he shares with his wife, Elizabeth, that led them to create History Matters, a foundation dedicated to historic preservation. Since 2009 Steve and Elizabeth have traveled across the country to save endangered historic treasures, raising money via lectures, receptions, galas, luncheons, dinners, and their popular writers workshops. To date, nearly 2,500 students have attended those workshops. In 2012 their work was recognized by the American Library Association, which named Steve the first spokesman for National Preservation Week. He was also appointed by the Smithsonian Board of Regents to serve on the Smithsonian Libraries Advisory Board to help promote and support the libraries in their mission to provide information in all forms to scientists, curators, scholars, students, and the public at large. He has received the Royden B. Davis Distinguished Author Award and the 2013 Writers for Writers Award from "Poets & Writers." His novel "The Columbus Affair" earned him the Anne Frank Human Writes Award, and his historic preservation work merited the 2013 Silver Bullet from International Thriller Writers.

Steve Berry was born and raised in Georgia, graduating from the Walter F. George School of Law at Mercer University. He was a trial lawyer for 30 years and held elective office for 14 of those years. He is a founding member of International Thriller Writers a group of more than 2,600 thriller writers from around the world and served three years as its co-president.

For more information, visit www.steveberry.org. "From the Hardcover edition.""

"All the Berry hallmarks are here: scale, scope, sweep, history - plus breathless second-by-second suspense. I love this guy."—Lee Child

"Steve Berry always finds intriguing ways to link the past to the present in his fast-paced thrillers.  The Paris Vendetta is his best yet."—Harlan Coben