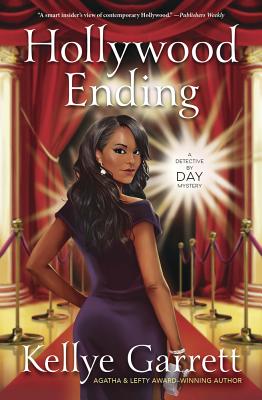 This is book number 2 in the Detective by Day Mystery series.

Tinseltown's awards season is in full swing, and everyone is obsessed with dressing up, scoring free swag, and getting invited to the biggest awards shows of the year. But when celebrity publicist Lyla Davis is killed, the festive mood comes to an abrupt halt.

Apprentice private eye Dayna Anderson thinks she's uncovered the killer. Unfortunately, what starts as an open-and-shut case turns out to be anything but. Diving deeper into the investigation, Dayna gets a backstage look at gossip blogging, Hollywood royalty, and one of entertainment's most respected awards shows--all while trying to avoid her own Hollywood ending.

Named Best of 2018 by Suspense Magazine

"Garrett, who wrote for TV's Cold Case, brings a smart insider's view of contemporary Hollywood to this lighthearted series."--Publishers Weekly

"Day's funny and determined, the sort of woman who really WOULD make a wisecrack when faced with danger."--Donna Andrews, New York Times bestselling author of the Meg Langslow series

"Fasten your seatbelts. A star is born "--Nancy Martin, author of the Blackbird Sisters mysteries

Winner of the 2018 Agatha Award for Best First Novel

Winner of the 2018 Lefty Award for Best Debut

Winner of the 2018 IPPY Gold Medal for Best First Book

" A] winning first novel and series launch...Garrett writes with humor and insight about the Hollywood scene."--Publishers Weekly (starred review)

"A smart, sassy debut."--Library Journal (starred review) and Debut of the Month

"Veteran TV writer Garrett uses her Cold Case experience to inform her debut, which sets up more than one charming character and isn't afraid to go cynical on all things LA."--Kirkus Reviews

"Toss in a hit-and-run, a steep reward, and more one-liners than a Marx Brothers marathon and you've got Hollywood Homicide."--Catriona McPherson, Agatha Award-winning author

"Has a heart as big as Los Angeles."--Rachel Howzell Hall, author of the LAPD Detective Elouise Norton series

"Garrett has written a novel with great voice, characters, hilarious moments, and a lot of Hollywood."--BookRiot

Kellye Garrett (East Orange, NJ) spent eight years working in Hollywood, including a stint writing for Cold Case. The first book in her Detective by Day Mystery series, Hollywood Homicide, won the Agatha, Lefty and Independent Publisher IPPY awards for best first novel. A former magazine editor, she holds a BS in magazine writing from Florida A&M and an MFA in screenwriting from USC's famed film school. She now works for a leading media company and brainstorms ways to commit murder for her novels.