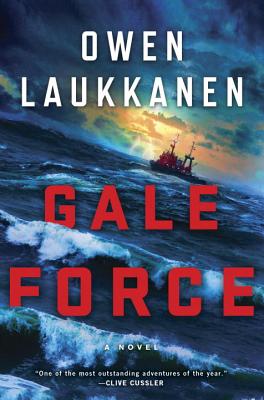 For all lovers of maritime adventure comes an electrifying thriller of treachery and peril on the high seas featuring a dynamic new heroine, from multi-award-nominated suspense star Owen Laukkanen.

In the high-stakes world of deep-sea salvage, an ocean disaster can mean a huge payoff--if you can survive the chase.

McKenna Rhodes has never been able to get the sight of her father's death out of her mind. A freak maritime accident has made her the captain of the salvage boat Gale Force, but it's also made her cautious, sticking closer to the Alaska coastline. She and her crew are just scraping by, when the freighter Pacific Lion, out of Yokohama, founders two hundred miles out in a storm.

This job is their last chance--but there is even more at stake than they know. Unlisted on any manifest, the Lion's crew includes a man on the run carrying fifty million dollars in stolen Yakuza bearer bonds. The Japanese gangsters want the money. The thief's associates want the money. Another salvage ship, far bigger and more powerful than Gale Force, is racing to the rendezvous as well. And the storm rages on. If McKenna can't find a way to prevail, everything she loves--the ship, her way of life, maybe even her life itself--will be lost.

Owen Laukkanen is the author of the Stevens and Windermere series, beginning with The Professionals, which was nominated for the Anthony Award, Barry Award, Spinetingler Magazine Best Novel: New Voices Award, and the International Thriller Writers’ Thriller Award for best first novel. His follow-up, Criminal Enterprise, was nominated for the ITW Thriller Award for best novel. A resident of Vancouver, British Columbia, he is now at work on the next book featuring Stevens and Windermere.

“One of the outstanding adventures of the year -- a big sea story with a brilliant and beautiful woman as the tough captain of a salvage boat.” —CLIVE CUSSLER

“An absolute blast of a nautical thriller, as good a tale of mayhem and adventure on the high seas as I’ve read in years.” —JOHN LESCROART

“I absolutely love a thriller that expertly opens a window to a dangerous profession I never knew about – in this case the world of maritime salvage operations. Owen Laukkanen must have seawater in his veins and he’s struck gold with Gale Force. It’s a propulsive and entirely engaging modern-day sea adventure.” —C.J. BOX

“An adventure tour-de-force as taut as a wire rope dragging a ship through the high seas. Imagine it: biting winds, rogue waves, and a young female captain to be reckoned with. Intriguingly face-paced, the suspense never lets up. You don’t want to miss this thrilling tale.”—GAYLE LYNDS

“A fantastic thriller! Owen Laukkanen has created a modern high-seas adventure with such realism that you’ll swear you can taste the salt air and feel the crashing waves as you race through the lightning-paced story. With distinctive characters, tense action, and a twisty plot, Gale Force is a novel you won’t want to put down until the very last page.”—BOYD MORRISON

“Gale Force draws you in from the very beginning, then leaves you breathless as you race to the finish. Owen Laukkanen’s intimate knowledge of the sea and ocean-faring vessels is apparent from the first page – but it’s his skill in writing suspense that grabs you like a riptide, not letting go until the very last page. Quite simply one of the best books I’ve read all year.”  —ROBIN BURCELL

“Sailors always start great sea stories with, ‘This really happened!’ That’s how Owen Laukkanen deserves to introduce Gale Force. When you read this thrilling tale of salvage at sea, you will never doubt his brave woman captain’s fight to save her father’s salvage ship from greed, evil, and a horrific storm.” —JUSTIN SCOTT