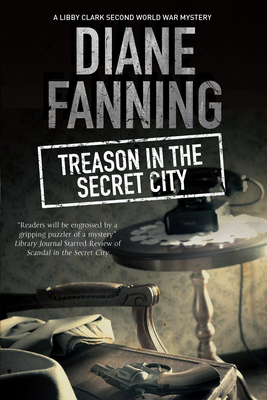 This is book number 2 in the Libby Clark Mystery series.

Second in the exciting new World War II mystery series featuring intrepid research chemist-sleuth Libby Clark. 30th May 1944. In the middle of the night, Libby Clark is roused from sleep by a colleague in distress. Marvin's cousin Frannie has been charged with treason, and he hopes that Libby, with her clear-headed scientific mind, can find a way to help prove her innocence. Libby, a chemist at a secret World War II facility in Oak Ridge, Tennessee, agrees to help her friend and pursue the truth. Libby's investigations soon uncover the immoral Dr Hansrote, who has tricked Frannie into her treachery. But, the evil at Oak Ridge seems to run deeper and in Libby's determination to uncover the truth, she not only finds herself up against the authorities, but also caught in the crosshairs of a deadly cabal of indoctrinated spies, greedy opportunists and unscrupulous collaborators. Can Libby survive the confluence of challenges? Or will one of them fashion a trap she cannot escape?