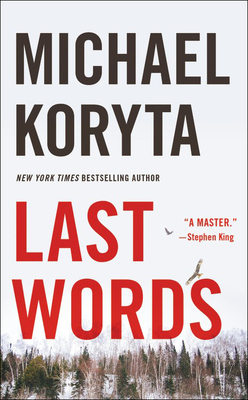 "Koryta knows what he's talking about. The last page of LAST WORDS hints at the plot of Koryta's next novel, and I say bring it on." - The Washington Post
Markus Novak just wants to come home. An investigator for a Death Row defense firm, Novak's life derailed when his wife was killed in the midst of a case. Two years later, her murderer is still at large, and Novak's attempts to learn the truth about her death have jeopardized his job. Now he's been all but banished to Garrison, Indiana to assess a cold case that he's certain his boss has no intention of taking.
As Novak knows too well, some crimes never do get solved. The answers lie in the fiendish brain of a dangerous man, the real identity of a mysterious woman, and deep beneath them all, a network of secrets deadlier than he can imagine. If Novak he has any chance of returning to the life and career he left behind in Florida, he'll need to find the truth in Garrison first.

Michael Koryta is the New York Times bestselling author of ten novels, most recently Those Who Wish Me Dead. His previous novels--including The Prophet, The Ridge, and So Cold The River--were New York Times notable books, national bestsellers, and have been nominated for numerous awards, including having won the Los Angeles Times Book Prize. A former private investigator and newspaper reporter, Koryta graduated from Indiana University with a degree in criminal justice. He lives in St. Petersburg, Florida, and Bloomington, Indiana.