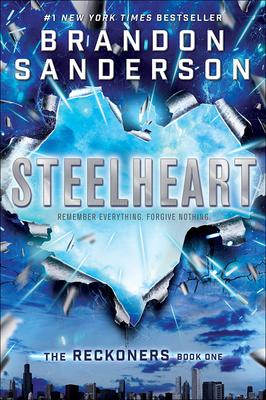 #1 "New York Times" bestselling author Brandon Sanderson, who was chosen to complete Robert Jordan's Wheel of Time series and created the internationally bestselling Mistborn trilogy, presents "Steelheart," the first book in the Reckoners series, an action-packed thrill ride that will leave readers breathless.
How far would you go for revenge if someone killed your father?
If someone destroyed your city?
If everything you ever loved was taken from you?
David Charleston will go to any lengths to stop Steelheart. But to exact revenge in Steelheart's world, David will need the Reckoners--a shadowy group of rebels bent on maintaining justice.
And it turns out that the Reckoners might just need David too.
Look for book two in the Reckoners series, Firefight, available in 2014.
STAR] "Snappy dialogue, bizarre plot twists, high intensity action, and a touch of mystery and romance; it's a formula that sucks readers into the prologue, slings them through one tension-filled encounter after the other, and then...leaves them panting for the sequel."--"Booklist," Starred
"The near-constant action, Sanderson's whiz-bang imaginings, and a fully realized sense of danger... make this an absolute page-turner."--"Publisher's Weekly"
"Perfect for genre fans who love exciting adventure stories with surprising plot twists."--"School Library Journal"
" "
"A straight-up Marvel Comics-style action drama featuring a small band of human assassins taking on costumed, superpowered supervillains with melodramatic monikers."--"Kirkus Reviews"
"Fantastic The suspense is relentless and the climax explosive, with a resolution that I'll be thinking about for a long time." --James Dashner, "New York Times" bestselling author of the Maze Runner series and The Eye of Minds
"Unfortunately for my ego, Steelheart is another win for Sanderson, proving that he's not a brilliant writer of epic fantasy, he's simply a brilliant writer. Period." --Patrick Rothfuss, author of the "New York Times" and "USA Today" bestseller The Name of the Wind.

BRANDON SANDERSON is the author of the #1 "New York Times" bestseller "Steelheart," the first book in the Reckoners series, the internationally bestselling Mistborn trilogy, and he was chosen to complete Robert Jordan's Wheel of Time series. His books have been published in more than twenty-five languages and have sold millions of copies worldwide. He lives and writes in Utah. To learn more about Brandon and his books, visit him at brandonsanderson.com and look out for "Firefight," the exciting sequel to "Steelheart "and the second book in the Reckoners series, available from Delacorte Press.