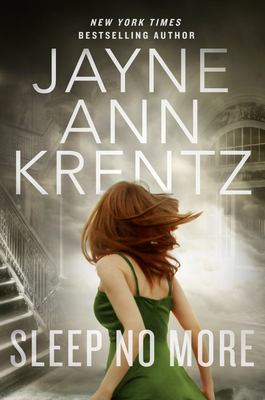 New York Times bestselling author Jayne Ann Krentz returns with the first novel of the Lost Night Files, an exciting new romantic suspense trilogy about a night that changed three women forever—but that none of them can remember.

Seven months ago, Pallas Llewellyn, Talia March, and Amelia Rivers were strangers, until their fateful stay at the Lucent Springs Hotel. An earthquake and a fire partially destroyed the hotel, but the women have no memory of their time there. Now close friends, the three women co-host a podcast called the Lost Night Files, where they investigate cold cases and hope to connect with others who may have had a similar experience to theirs—an experience that has somehow enhanced the psychic abilities already present in each woman.

After receiving a tip for their podcast, Pallas travels to the small college town of Carnelian, California, to explore an abandoned asylum. Shaken by the dark energy she feels in the building, she is rushing out when she’s stopped by a dark figure—who turns out to be the women's mysterious tipster.

Ambrose Drake is certain he’s a witness to a murder, but without a body, everyone thinks he’s having delusions caused by extreme sleep deprivation. But Ambrose is positive something terrible happened at the Carnelian Sleep Institute the night he was there. Unable to find proof on his own, he approaches Pallas for help, only for her to realize that Ambrose, too, has a lost night that he can’t remember—one that may be connected to Pallas. Pallas and Ambrose conduct their investigation using the podcast as a cover, and while the townsfolk are eager to share what they know, it turns out there are others who are not so happy about their questions—and someone is willing to kill to keep the truth from coming out.

Jayne Ann Krentz is the author of more than fifty New York Times bestsellers. She has written contemporary romantic suspense novels under that name, as well as futuristic and historical romance novels under the pseudonyms Jayne Castle and Amanda Quick, respectively. There are more than 35 million copies of her books in print. She lives in Seattle.

"This book is the first in a new series, and the interesting paranormal world and unsolved plotlines will keep readers clamoring for future titles. A richly layered mystery full of pleasing paranormal elements from a master of the genre."—Kirkus Reviews

"Krentz’s plot is characteristically twisty and her characters are well-shaded…Readers will be on the edges of their seats.”—Publishers Weekly

“With her usual impeccable sense of aplomb, Krentz deftly begins her new Lost Night trilogy with a flawlessly paced plot that is both timely and timeless. Skillfully tapping into the current vogue for true-crime podcasts with her heroine’s side hustle while at the same giving a clever nod to the eternal appeal of the Gothic with the book’s creepy old sanitorium setting and rumors of a murderous ghost, Krentz’s brand of smart, sexy romantic suspense remains perfectly on point.”—Booklist, starred review

"Krentz (Lightning in a Mirror) infuses gripping romantic suspense with the metaphysical in this novel that will delight long-time fans and new readers alike. A few unanswered questions create an intriguing set-up for the next book in this new series."—Library Journal