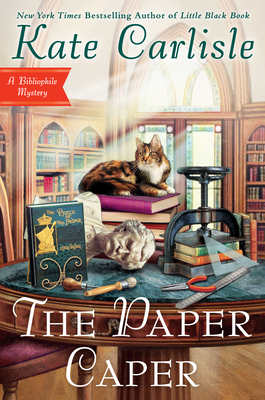 This is book number 16 in the Bibliophile Mystery series.

Brooklyn is excited to be included in the Covington Library’s first annual Mark Twain Festival. She’ll rebind a rare first edition of The Prince and the Pauper before an enthusiastic audience of book nerds—her favorite people. The festival is the passion project of wealthy media mogul, book lover, and newspaper owner Joseph Cabot, who considers himself Twain’s biggest fan. Brooklyn’s hunky husband, Derek, and his security team once rescued Joseph from a corporate kidnapping attempt. Now Derek and his agents are charged with keeping Joseph and his beautiful young wife safe during the festivities taking place all over town.

The centerpiece of the festival is a citywide contest based on The Prince and the Pauper: one lucky look-alike will trade places with Joseph for a few days—with access to all the money and power that Joseph commands. Brooklyn and Derek worry that the contest might be generating some dangerous attention. And when someone is mysteriously poisoned right before Brooklyn’s eyes, she’s not convinced that the victim was the intended target. Now she and Derek must frantically chase clues and suspects through the streets of San Francisco before another murder becomes front-page news. . . .

“Kate Carlisle never fails to make me laugh, even as she has me turning the pages to see what's going to happen next."—Miranda James, New York Times bestselling author of the Cat in the Stacks Mysteries

“Another superb entry....Quirky characters and an intriguing cookbook with a fabulous history add to the fun. Highly entertaining.”—Carolyn Hart, New York Times bestselling author of the Death on Demand Mysteries

“A gently paced, intelligently plotted tale that educates while it entertains.”—Crimespree

“Another suspenseful and humorous mystery full of quirky characters that you'll want to visit again and again.”—Fresh Fiction