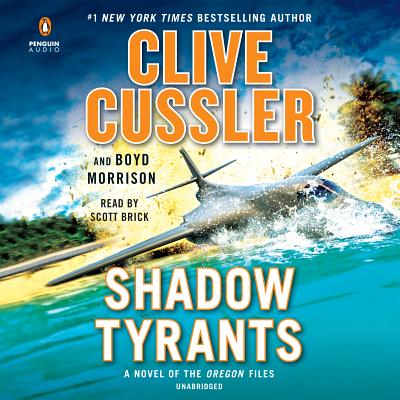 This is book number 13 in the The Oregon Files series.

Only Juan Cabrillo and the crew of the Oregon stand between two warring moguls and global havoc in this thrilling suspense novel in Clive Cussler's #1 New York Times bestselling series.

Nearly two thousand years ago, an Eastern emperor charged a small group with safeguarding secrets powerful enough to change the history of mankind. They went down in legend as the Nine Unknown Men--and now two rival factions of their descendants are fighting a mighty battle. Both sides think they are saving the world, but their tactics could very well bring about the end of humankind. Soon, Juan Cabrillo and his team of expert operatives aboard the Oregon find themselves trapped between two power-hungry adversaries, both of whom are willing to use shocking means to accomplish their goals.

Cabrillo and the team must divide and conquer as they fight dual threats, which include a supercomputer at sea and satellites that can wipe out technology across the globe--including the high-tech weapons on board the Oregon. The crew must rely on their unique skills to stop the tyrants in their tracks and save the earth from a dynasty of terror.

Clive Cussler is the author or coauthor of more than 50 previous books in five best-selling series, including Dirk Pitt, NUMA Files, Oregon Files, Isaac Bell, and Sam and Remi Fargo. His nonfiction works include Built for Adventure: The Classic Automobiles of Clive Cussler and Dirk Pitt, plus The Sea Hunters and The Sea Hunters II. They describe the true adventures of the real NUMA, which, led by Cussler, searches for lost ships of historic significance. With his crew of volunteers, Cussler has discovered more than 60 ships, including the long lost Confederate ship Hunley. He lives in Arizona.

Boyd Morrison is the coauthor, with Clive Cussler, of the Oregon Files novels Typhoon Fury, Piranha and The Emperor's Revenge, and the author of four other books. He is also an actor and engineer, with a doctorate in engineering from Virginia Tech, who has worked on NASA's space station project at Johnson Space Center and developed several patents at Thomson/RCA. In 2003, he fulfilled a lifelong dream by becoming a Jeopardy! champion. He lives in Seattle.

Scott Brick, an acclaimed voice artist, screenwriter, and actor, has performed on film, television, and radio. His stage appearances throughout the US include Cyrano, Hamlet, and MacBeth. In the audio industry, Scott has won over 20 Earphones Awards, as well as the 2003 Audie Award in the Best Science Fiction category for Dune: The Butlerian Jihad. After recording nearly 250 books in five years, AudioFile Magazine named Scott “one of the fastest-rising stars in the audiobook galaxy” and proclaimed him one of their Golden Voices. Brick’s range is unparalleled as he reads thrillers to narrative nonfiction, from biographies to science fiction with aplomb.

"Cussler and action-adventure fans will love this … the sheer insanity of the story line will keep readers guessing about what’s going on until the last page of the book."—Associated Press