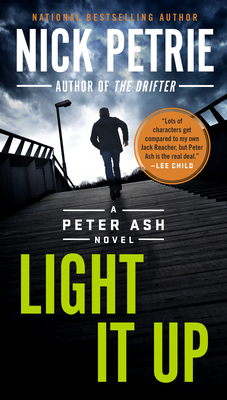 Praise for Light It Up

“Gun battles, harrowing high-speed escapes and lethal hand-to-hand fights...Petrie colors in more of the portrait of his troubled hero, including his darkest moment in the Middle East. Ash's posse is coalescing, too, including June, the savvy reporter he fell for in Burning Bright, and Lewis, the smooth but equally lethal compadre whose friendship with Ash has a Spenser-Hawk vibe....Light It Up extends a quality action series with plenty of room ahead both for new adventures and character development.”—Milwaukee Journal Sentinel

“Like Robert Parker’s Spenser, Ash is a self-contained, unstoppable force with very useful friends. Vividly troubled yet likable, he intrigues the reader even while managing to save a little part of his world—again. The action in this third outing is nonstop; the drug scene is timely; the characters, including the villains, are deftly drawn, and the tension keeps rising.”—Library Journal

“Peter Ash is one of the most complex characters I've come across in a long time....There is grit in this tale that will stay with you for a long time. Perhaps forever.”—New York Times bestselling author David Baldacci

“[The] lean prose, gritty descriptions, and raw psychological depth give the novel a feel that reminded me of early Dennis Lehane.”—Milwaukee Journal-Sentinel

“A hell of a series.”—Kirkus Reviews (starred review)

“A top-notch series of thrillers marked by a considerable sympathy for veterans...Aficionados of Lee Child's Jack Reacher will enjoy getting to know this new action hero.”—Library Journal