Once upon a Spine (Bibliophile Mystery #11) (Mass Market) 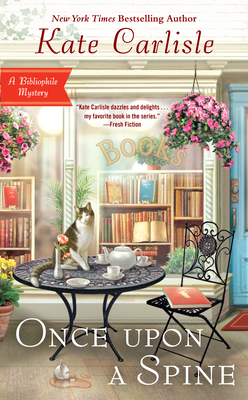 This is book number 11 in the Bibliophile Mystery series.

In this Bibliophile Mystery from the New York Times bestselling author of Books of a Feather, San Francisco bookbinder Brooklyn Wainwright stumbles through the looking glass in a tale of murder, rare books, and a quest for the perfect pie…

Brooklyn's oh-so-proper future in-laws are traveling from England to meet her, and if that's not enough to set her on edge, rumors abound that the charming Courtyard shops across the street may be replaced by high-rise apartments. Their trendy neighborhood will be ruined unless Brooklyn and her fiancé, Derek Stone, can persuade the shopkeepers not to sell.

But with a rare edition of Alice's Adventures in Wonderland causing bad blood at the Brothers Bookshop and a string of petty vandalism making everyone nervous, Brooklyn and Derek feel like they're attempting six impossible things before breakfast. Then the owner of the Rabbit Hole juice bar is felled by his own heavy shelves, and the local cobbler lies dead beside him. An accident . . . or something more sinister? Things get curiouser and curiouser when a second priceless copy of Alice is discovered. Will it stir up more trouble within the close-knit community?

As the Brits descend, Brooklyn learns they're not so stuffy after all. Derek's dad is won over with chocolate cream pie, and his psychic mum would kill to help Brooklyn solve this murder—before another victim takes a tumble.

“Kate Carlisle never fails to make me laugh, even as she has me turning the pages to see what’s going to happen next.”—Miranda James, New York Times bestselling author of the Cat in the Stacks Mysteries

“Carlisle’s dialogue is natural, her prose has great flow, and her striking descriptions bring Brooklyn’s world to life.”—Crimespree Magazine

“A true whodunit...highlights Carlisle’s story line skills, her love for books, and her always-endearing heroine.”—Richmond Times-Dispatch