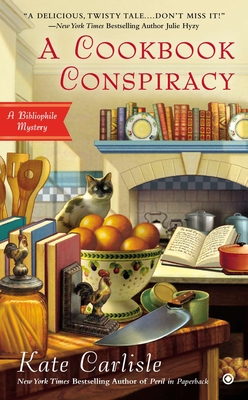 This is book number 7 in the Bibliophile Mystery series.

It’s a recipe for disaster when bookbinder Brooklyn Wainwright is asked to restore an antique cookbook in this novel in the New York Times bestselling Bibliophile Mystery series.

Brooklyn’s sister Savannah and her former culinary school classmates all became successful chefs, especially Savannah’s ex-boyfriend Baxter Cromwell, who went on to culinary superstardom. When he invites the old gang to the gala opening of his new restaurant in San Francisco, Savannah asks Brooklyn to restore a rare antique cookbook as a present for him.

The night they all gather, Baxter is found dead, the cookbook has disappeared, and Savannah becomes the suspect du jour. But Brooklyn knows her sister is innocent, and there are plenty of old grudges simmering among this backstabbing bunch. Now she’ll have to turn up the heat on the investigation before Chef Savannah finds herself slinging hash in a prison cafeteria.

“Kate Carlisle never fails to make me laugh, even as she has me turning the pages to see what’s going to happen next.”—Miranda James, New York Times bestselling author of the Cat in the Stacks Mysteries

“Carlisle’s dialogue is natural, her prose has great flow, and her striking descriptions bring Brooklyn’s world to life.”—Crimespree Magazine

“A true whodunit...highlights Carlisle’s story line skills, her love for books, and her always-endearing heroine.”—Richmond Times-Dispatch