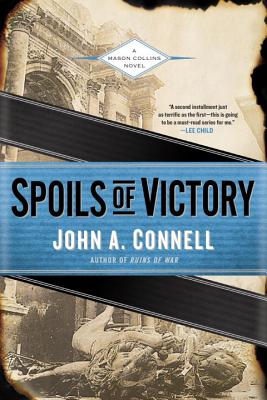 Garmisch-Partenkirchen is a scenic Alpine ski town that managed to escape the destruction of World War II. It is also a refuge for war criminals, a depository for Nazi stolen riches, and the latest post for army investigator Mason Collins.

When a friend who fought alongside Mason tells him about a plot by a group of powerful men, then is killed soon afterward, it’s clear that Mason must make his investigation as quick and quiet as possible. To uncover the truth, Mason plunges into a shadowy labyrinth of coconspirators, including former SS and Gestapo officers, U.S. Army OSS officers, and liberated Polish POWs.

But someone is pulling strings to stifle his efforts, and Mason must feel his way in the darkness if he is going to find out who in town has the most to gain—and the most to lose…

John A. Connell is the author of Ruins of War, and has worked as a cameraman on films such as Jurassic Park and Thelma & Louise and on TV shows, including The Practice and NYPD Blue. He now lives with his wife in Paris, France, where he is at work on his third Mason Collins novel.

“A second installment just as terrific as the first—this is going to be a must-read series for me.”—Lee Child, #1 New York Times Bestselling Author