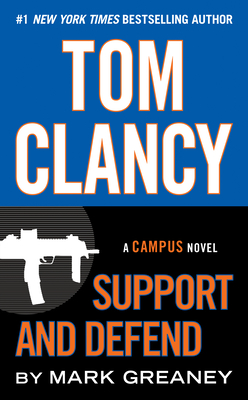 By Mark Greaney
$8.99
Able to Backorder

Over the course of three decades, Tom Clancy created a world alive with prescient action and remarkable individuals. In Tom Clancy Support and Defend, covert agent Dominic Caruso faces the deadliest challenge of his career.

Dominic Caruso. Nephew of President Jack Ryan. FBI agent. And operator for the top secret U.S. intelligence agency known as The Campus. Already scarred by the death of his brother, Caruso is further devastated when he is unable to save a friend and his family from a terrorist attack. Ethan Ross was a mid-level staffer for the National Security Council. Now he’s a wanted fugitive on the run with a microdrive that contains enough information to destroy American intelligence efforts around the world. The CIA is desperate to get the drive back before it’s captured by the Russians or one of the various terrorist groups also vying for it.

Only Caruso stands in their way—but can he succeed without the aid of his Campus colleagues?

A little more than thirty years ago Tom Clancy was a Maryland insurance broker with a passion for naval history. Years before, he had been an English major at Baltimore’s Loyola College and had always dreamed of writing a novel. His first effort, The Hunt for Red October—the first of the phenomenally successful Jack Ryan novels—sold briskly as a result of rave reviews, then catapulted onto the New York Times bestseller list after President Reagan pronounced it “the perfect yarn.” From that day forward, Clancy established himself as an undisputed master at blending exceptional realism and authenticity, intricate plotting, and razor-sharp suspense. He passed away in October 2013.

Mark Greaney has a degree in international relations and political science. In his research for the Gray Man novels, including Mission Critical, Agent in Place, Gunmetal Gray, Back Blast, Dead Eye, Ballistic, On Target, and The Gray Man, he traveled to more than fifteen countries and trained alongside military and law enforcement in the use of firearms, battlefield medicine, and close-range combative tactics. He is also the author of the New York Times bestsellers Tom Clancy Support and Defend, Tom Clancy Full Force and Effect, Tom Clancy Commander in Chief, and Tom Clancy True Faith and Allegiance. With Tom Clancy, he coauthored Locked On, Threat Vector, and Command Authority.