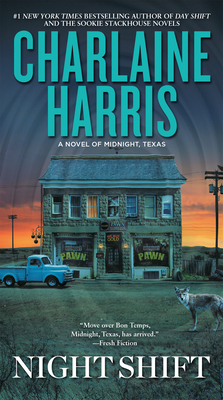 This is book number 3 in the A Novel of Midnight, Texas series.

DON'T MISS SEASON 2 OF MIDNIGHT, TEXAS, THE NBC PRIMETIME TELEVISION SERIES BASED ON THE BESTSELLING NOVELS!

From the #1 New York Times bestselling author of the Sookie Stackhouse novels comes the third novel of Midnight, Texas, the town where some secrets will never see the light of day...

At Midnight’s local pawnshop, weapons are flying off the shelves—only to be used in sudden and dramatic suicides right at the main crossroads in town. Who better to figure out why blood is being spilled than the vampire Lemuel, who, while translating mysterious texts, discovers what makes Midnight the town it is. There’s a reason why witches and werewolves, killers and psychics, have been drawn to this place...

Charlaine Harris is the #1 New York Times bestselling author of the Sookie Stackhouse and Midnight, Texas fantasy/mystery series and the Aurora Teagarden, Harper Connelly, and Lily Bard mystery series. Her books have inspired HBO's True Blood, NBC's Midnight, Texas, and the Aurora Teagarden movies for Hallmark Movies & Mysteries. She has lived in the South her entire life.

Praise for Charlaine Harris and her Novels of Midnight, Texas

“The Mark Twain of things that live under your bed.”—Houston Press

“Fun but creepy...A very quirky mystery that reveals more fascinating details about the varied denizens of this little town.”—Locus

“A little magic, a little mystery, and a lot of imagination make for a story that is both fun and edgy.”—Kirkus Reviews

“As intimate and deep as the Stackhouse novels.”—Library Journal