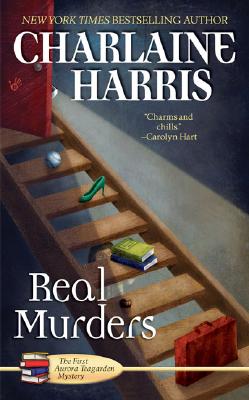 This is book number 1 in the An Aurora Teagarden Mystery series.

Lawrenceton, Georgia, may be a growing suburb of Atlanta, but it’s still a small town at heart. Librarian Aurora “Roe” Teagarden grew up there and knows more than enough about her fellow townsfolk, including which ones share her interest in the darker side of human nature.

With those fellow crime buffs, Roe belongs to a club called Real Murders, which meets once a month to analyze famous cases. It’s a harmless pastime—until the night she finds a member dead, killed in a manner that eerily resembles the crime the club was about to discuss. And as other brutal “copycat” killings follow, Roe will have to uncover the person behind the terrifying game, one that casts all the members of Real Murders, herself included, as prime suspects—or potential victims...

Charlaine Harris is the #1 New York Times bestselling author of the Sookie Stackhouse and Midnight, Texas, fantasy/mystery series and the Aurora Teagarden, Harper Connelly, and Lily Bard mystery series. Her books have inspired HBO’s True Blood, NBC’s Midnight, Texas, and the Aurora Teagarden movies for Hallmark Movies & Mysteries. She has lived in the South her entire life.

“Real Murders is the first adventure for Harris’s perceptive protagonist and I eagerly look forward to the second…Harris’s story alternately charms and chills, a difficult combination she manages with aplomb and brilliance.”—Award-winning author Carolyn Hart

“One of the most original premises I’ve ever come across in a mystery, and the whole book is great bloody fun.”—Barbara Paul

“An ingenious plot and sufficient flow of blood keep the pages flying in Harris’s novel…Harris draws the guilty and the innocent into an engrossing tale.”—Publishers Weekly