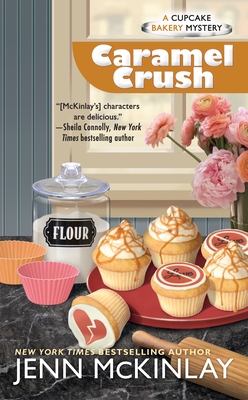 This is book number 9 in the Cupcake Bakery Mystery series.

When a breakup via cupcake threatens to crumble their friend's life for good, Mel and Angie race to solve the murder as this New York Times bestselling series continues...

Love is in the air at Fairy Tale Cupcakes as Angie prepares for her wedding, but co-owner, Mel, is preparing for a breakup. Her old friend, Diane Earnest, is dumping her fiancé after discovering he’s only marrying her for her money. She wants Mel to personally deliver a batch of caramel breakup cupcakes to the louse and give her a play-by-play of his reaction.

When Mel finally tracks the man down, the look on his face isn’t the reaction she was expecting: he’s dead. After the police arrive and see the incriminating cupcakes, Diane becomes their prime suspect. If she hopes to taste freedom again, Mel and Angie must make sure the real killer gets their just desserts...

Jenn McKinlay, the New York Times bestselling author of the Cupcake Bakery Mysteries (including Vanilla Beaned, Dark Chocolate Demise, and Sugar and Iced), has baked and frosted cupcakes into the shapes of cats, mice, and outer-space aliens, to name just a few. Writing a mystery series based on one of her favorite food groups (dessert) is as enjoyable as licking the beaters, and she can’t wait to whip up the next one. She is also the author of the Hat Shop Mysteries (Assault and Beret, Copy Cap Murder) and the Library Lover’s Mysteries (Better Late than Never, A Likely Story).

Praise for the Cupcake Bakery Mysteries

“All the ingredients for a winning read.”—Cleo Coyle, New York Times bestselling author of the Coffeehouse Mysteries

“Good plotting and carefully placed clues make this an enjoyable, light mystery, made a little sweeter with recipes for the cupcakes Mel’s team creates.”—The Mystery Reader