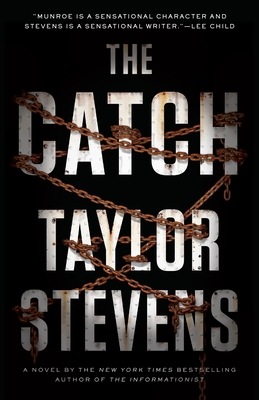 This is book number 4 in the Vanessa Michael Munroe series.

“Stevens excels at depicting pulse-pounding danger… Her writing places her heads above most authors working in the thriller genre. Only Dan Brown and Lee Child come close.” —Dallas Morning News

Vanessa Michael Munroe, chameleon and information hunter, has a reputation for getting things done—often dangerous and not quite legal things.

With blood on her hands and a soul stained with guilt, Munroe has fled to Djibouti, Africa. There, with no responsibility except a gig at a small maritime security company, Munroe finds stillness—until she’s pressured to work as an armed guard on a ship bound for Kenya. On board, Munroe discovers the contract is merely cover for gunrunning; when the ship is invaded off the Somali coast, she fights her way out—dragging the unconscious captain with her.

But nothing about the hijacking is what it seems. The pirates had come for the captain, and continuing their pursuit, they unwittingly raise the killer’s instinct Munroe has tried so hard to bury. Wounded and on the run, Vanessa Michael Munroe will use the life of her catch as bait and bartering chip to manipulate every player, and wash her conscience clean.

TAYLOR STEVENS is the award-winning New York Times bestselling author of The Informationist, The Innocent and The Doll. Featuring Vanessa Michael Munroe, the series has received critical acclaim and the books are published in twenty languages. The Informationist has been optioned for film by James Cameron's production company, Lightstorm Entertainment. Born in New York State, and into the Children of God, raised in communes across the globe and denied an education beyond sixth grade, Stevens was in her twenties when she broke free to follow hope and a vague idea of what possibilities lay beyond. She now lives in Texas, and is at work on the next Munroe novel.

“A great page-turning choice for a read-it-in-one-sitting airplane ride or lazy afternoon on the back porch…The novel transports readers to another world, giving a solid dose of action-adventure and a kick-butt female protagonist. The Catch…is a great escape.” —Star-Telegram

“The writer makes her protagonist more empathetic and likable than ever — startlingly so, because the Michael (her preferred name) Munroe we see here is at her most focused, ruthless and emotionally distant. It’s a difficult balancing act, but one that Stevens pulls off with her usual wit, precision and grace… [An] exceptional novel.” —Dallas Morning News

“Think Catwoman in plain clothes. Lisbeth Salander sans dragon tattoo. Jack Reacher with an extra X-chromosome. Whatever—Vanessa Michael Munroe has to be among the cleverest, fightingest and all-around baddest heroines in contemporary suspense fiction. …A straight-up adventure tale about a woman who thinks on her feet (that is, when she is not using them to kick bad-guy booty) and always stays one step ahead of her adversaries. My prediction: This will be one of the summer’s most popular beach reads.” —BookPage

"This writer is fabulous and the characterizations are thrilling... You get what you see, and that includes the cleverness, the grit, and the pain. A definite keeper!” —Suspense Magazine

“Taylor Stevens continues her saga of Vanessa Michael Munroe, begun in The Informationist, with a fast-paced action thriller that vividly shows why Munroe is probably the best new action hero.” —Huntington News

“Thriller fans will immediately be sucked into this life-or-death tale as Stevens’s fast-paced plot and indomitable and justice-driven heroine keep the pages turning.” —Library Journal

“This action-adventure thriller moves along at breakneck speed with the requisite violence peppering most of the pages. Munroe is a smart, fiercely strong, yet damaged woman in the vein of Lisbeth Salander, and she could hold her own with Robert Ludlum’s Jason Bourne or Barry Eisler’s Rain. For fans of high-energy action.” —Booklist

“Munroe makes for an intriguing action hero, and the fight scenes are refreshingly stark and well paced.” —Publishers Weekly

“Stevens resurrects Vanessa “Michael” Munroe, her dangerous, androgynous antihero, for another dark adventure…Fans of the series like that Stevens’ writing takes them to little-known places and offers glimpses into the day-to-day life of the economically developing world. Stevens continues her spare, gritty approach to storytelling, which has made Munroe one of the genre’s most compelling characters, in this latest installment of the haunted heroine’s troubled life.” —Kirkus