Those Who Wish Me Dead (Mass Market) 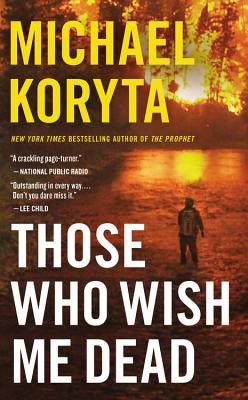 "Reading Michael Koryta is like stepping into fast water. You don't know where the current will take you, only that it's strong and deep and likely to sweep you away. That's what the best fiction does, and Koryta does it better than just about anyone else."
—John Hart, author of Iron House

"Michael Koryta is a fearless stylist...a heart-thumping backwoods adventure that sends two creatively sadistic killers into Montana's Beartooth Mountains, where they spark a monster forest fire to flush out the only witness to their crimes...Koryta rigs his tripwire plot with all sorts of unpredictable characters and unforeseen events, including a "flint-and-steel" electrical storm that will make your hair stand on end. There are any number of hunting parties combing the burning woods for Jace, from the Blackwell brothers to two determined women riding an injured horse. But sitting here, heart in mouth, it sure looks as if that raging forest fire will outrun them all."
—Marilyn Stasio, The New York Times Book Review

"Not only does its plot sizzle with one shocking turn after another; it also involves a massive forest fire so vividly described you almost expect the edges of the pages to be scorched...Koryta builds the book's suspense with impressive skill, shifting among different characters' points of view to keep the reader constantly on edge."
—Colette Bancroft, Tampa Bay Times

"This book captured me. Here are two bad guys so bad, so well drawn, that I wanted to avert my eyes--but I didn't want to miss a beat of this sharp thriller. This is a smart big book with what are called twists and turns, but which are really terrific surprises in every deepening layer. Young Jace's journey to survive is a gripping rush. I know not to run in the woods but I wanted to tell him: run, woods or not, just run!"
—Ron Carlson, author of The Signal

"This novel is brilliantly orchestrated. Also crucial to its success is Koryta's mastery of the beautiful but threatening setting, including a mountain fire's ability to electrify the ground, radiate a lethal force field-and create otherworldly light shows. Summer reading doesn't get better than this."
—Kirkus (starred review)

"Koryta, a widely-praised veteran of cross-genre tales, has upped his game with this stand-alone's seamless blend of western-wilderness thriller and mainstream crime fiction, with a prickly dab of horror...Combine Koryta's existing fan base, the current vogue for wilderness thrillers, and an aggressive marketing campaign, and you get a novel certain to attract a whole lot of eager readers."
—Christine Tran, Booklist (starred review)

"More than outstanding, this book will have you jumping from one chapter to another as the fire races across the mountains, as Jace and Hannah try to survive, and while Ethan tries to keep both killers away from Jace...This thriller had me glued to the words, not wanting to do anything else but finish this book. Koryta pens a novel that will leave you gasping along with the characters.This is excellent and one I recommend. Absolutely without a doubt."
—Suspense Magazine