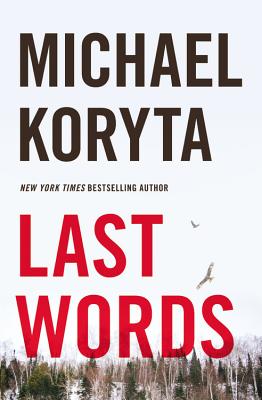 "An inventive storyteller who's also a skilled stylist, he's constantly experimenting, which explains why his private eye novel Last Words doesn't read like one...even on a literal level, Koryta's descriptions of that unknown realm beneath the one we know - with places like the Chapel Room and Maiden Creek and Greenglass River - possess an unearthly beauty. You almost begin to believe...that it's all one big cave down there, with endless interconnected rooms stretching into infinity."—Marilyn Stasio, The New York Times

"This moving series launch from bestseller Koryta (Those Who Wish Me Dead) illustrates why he's among today's top thriller writers. Koryta sensitively portrays regret and grief while plunging the reader into exciting, claustrophobic scenes deep inside the massive cave."—Publishers Weekly (starred)

"Outstanding launch of a new series. Koryta punctuates the intense underground scenes of Last Words with claustrophobia so realistic that it's palpable. He wrings every moment of excitement possible."—Associated Press

"Koryta knows what he's talking about. The last page of Last Words hints at the plot of Koryta's next novel, and I say bring it on."—The Washington Post

"Last Words might not make you eager to go underground yourself, but it will make you avid to keep turning the pages....a promising series kickoff; just be sure to read it in daylight."—Tampa Bay Times

"Koryta is a master of plot."—Bob Cunningham, Toledo Blade

"With each book, the talents of New York Times best-selling author Koryta (The Prophet) just get better."—Library Journal (starred)

ACCLAIM FOR THOSE WHO WISH ME DEAD: