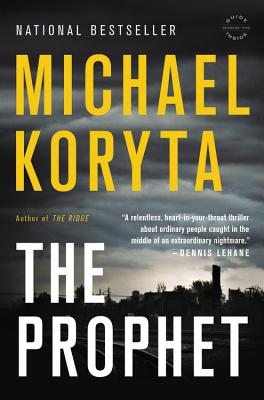 PRAISE FOR THE PROPHET:—-

"The Prophet is a relentless, heart-in-your-throat thriller about ordinary people caught in the middle of an extraordinary nightmare."—Dennis Lehane

"Michael Koryta is an amazingly talented writer, and I rank The Prophet as one of the sharpest and superbly plotted crime novels I've read in my life."—Donald Ray Pollock, author of Knockemstiff and The Devil All the Time

"Friday Night Lights meets In Cold Blood in this powerful tale...It's a brilliantly paced thriller that keeps its villains at a tantalizing distance, a compelling family portrait, a study in morality that goes beyond the usual black-and-white judgments, and an entertaining spin on classic football fiction. A flawless performance."—Kirkus, starred review

"Thriller Award-finalist Koryta (The Ridge) triumphantly returns to crime fiction with this multi-layered exploration of guilt and redemption....Like Laura Lippman, Koryta has a gift for melding a suspenseful, twisty plot with a probing, unflinching look at his protagonists' weaknesses."—Publisher's Weekly, starred review

"The Prophet is like a long, heart-stopping pass down the sidelines in the final seconds of a decisive game. It's made me want to leap to my feet and cheer Koryta on."—Scott Smith

"A delicious read, intricately woven, with characters who are impossible to forget. Michael Koyta excites and satisfies on every level."
—Elin Hilderbrand

"Edgar-nominated mystery wunderkind Koryta (he turns 30 this year) has earned kudos from veteran thriller writers Stephen King and Dean Koontz. He proves plenty worthy of praise in this vivid portrayal of a small Midwestern town and the evils that befall it....With its crisp writing and steady suspense, this is a must-read for his fans both old and new."
—Booklist, starred review

"Somehow, Michael Koryta gets better with every book, no small feat considering the quality of those he's already written. Here's a writer for the new century, one to read, admire and, yes, envy."
—Tom Franklin, author of Crooked Letter, Crooked Letter