Through the Window (Mass Market Paperbound) 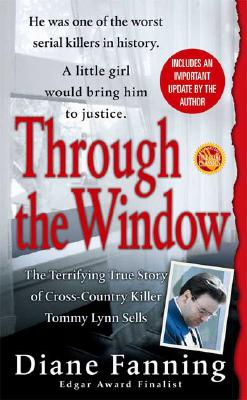 Ten-Year-Old Krystal Surles Watched In Horror
As Her Best Friend Was Murdered At The Hands Of An Intruder.

Then with cold-blooded precision he brought a twelve-inch boning knife to Krystal's throat. With a single, violent slash, he severed her windpipe and left her for dead. Miraculously, she survived and would lead authorities to the arrest of 35-year-old Tommy Lynn Sells, a former truck driver, carnival worker, and cross-country drifter...

He Aspired To Become "The Worst Serial Killer Of All Time."

With no apparent motive and no common pattern to his inconceivable bloodshed, the elusive Sells had carved his way across the country for two decades slaughtering women, men, transients, entire families, teenagers, and even infants with ghoulish abandon.

Through The Window is more than an investigation into a crime spree that stunned a nation. It's an utterly terrifying plunge into the unfathomable dark mind of a serial killer, and the heart-wrenching story of the brave child who finally brought him to justice.

Diane Fanning is the author of the Edgar Award finalist "Written in Blood: A True Story of Murder and a Deadly 16-Year-Old Secret That Tore a Family Apart." Her other works of true crime include the best-selling "Mommy's Little Girl," "A Poisoned Passion," "The Pastor's Wife," and "Gone Forever." She has been featured on "48 Hours," "20/20," Court TV and the Discovery Channel, and has been interviewed on dozens of radio stations coast to coast. Before becoming a nonfiction writer, Fanning worked in advertising, and she earned more than 70 Addy Awards. She lives in New Braunfels, Texas.