A Maigret Christmas: And Other Stories (Inspector Maigret) (Paperback) 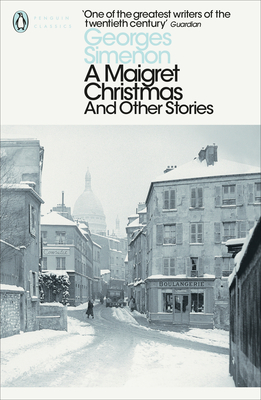 “One of the greatest writers of the twentieth century . . . Simenon was unequaled at making us look inside, though the ability was masked by his brilliance at absorbing us obsessively in his stories.” —The Guardian

In this delightful holiday-themed collection of nine short stories, Inspector Maigret must solve a series of little mysteries—just in time for Christmas morning

Christmas mysteries abound in this light-hearted holiday collection of Jules Maigret’s exploits: In one, an otherwise sensible little girl insists that she has seen Father Christmas, a statement alarming to her neighbors, Monsieur and Madame Maigret. Then, a choirboy helps the inspector solve a crime while he lies in bed with a cold; another boy, pursued by a criminal, ingeniously leaves a trail to help Maigret track him. Many of these stories feature observant and resourceful children, frightened yet resolute, who bring out a paternal streak in the childless Maigret.

The rapport between the inspector and these youthful heroes imparts a delightful freshness to this holiday collection. A Maigret Christmas is a cornucopia for fans of Maigret and mysteries alike.

Georges Simenon (1903–1989) was born on February 12th, 1903 in Liege, Belgium. At the age of nineteen, Simenon embarked to Paris to begin a career as a writer.  In 1923 he began publishing under various pseudonyms, and in 1929 began the Inspector Maigret series which helped elevate him to a household name in continental Europe.  His prolific output of more than four hundred novels and the gripping, dark realism of his prose has cemented him as an inedlible fixture of twentieth century literature.  He died in 1989 in Lausanne, Switzerland.

David Bellos is the director of the Program in Translation and Intercultural Communication at Princeton University, where he is also a professor of French and comparative literature. He has won many awards for his translations of Georges Perec, Ismail Kadare, and others, including the Man Booker International Translator’s Award.

“One of the greatest writers of the twentieth century . . . Simenon was unequaled at making us look inside, though the ability was masked by his brilliance at absorbing us obsessively in his stories.” —The Guardian

“These Maigret books are as timeless as Paris itself.” —The Washington Post

“Maigret ranks with Holmes and Poirot in the pantheon of fictional detective immortals.” —People

“I love reading Simenon. He makes me think of Chekhov.” —William Faulkner

“The greatest of all, the most genuine novelist we have had in literature.” —André Gide

“A novelist who entered his fictional world as if he were a part of it.”lle —Peter Ackroyd