The Pillars of the Earth (CD-Audio) 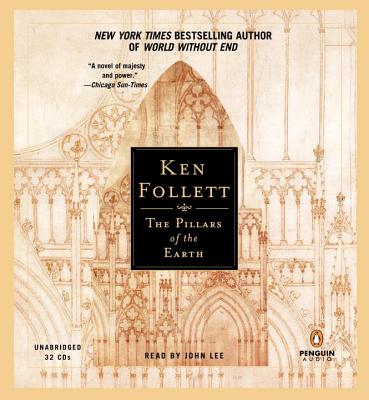 Make this your next book club selection and everyone saves.
Get 15% off when you order 5 or more of this title for your book club.
Simply enter the coupon code FOLLETPILLARS at checkout.
This offer does not apply to eBook purchases. This offer applies to only one downloadable audio per purchase.

Learn more about The Pillars of the Earth miniseries on Starz.

A spellbinding epic tale of ambition, anarchy, and absolute power set against the sprawling medieval canvas of twelfth-century England, this is Ken Follett's historical masterpiece.

Ken Follett is one of the world's best–loved novelists. He has sold more than one hundred million copies. His last book, World Without End, went straight to the No. 1 position on bestseller lists in the United States, Spain, Italy, Germany, and France.

He first hit the charts in 1978 with Eye of the Needle, a taut and original thriller with a memorable woman character in the central role. The book won the Edgar Award and became an outstanding film starring Kate Nelligan and Donald Sutherland.

He also wrote On Wings of Eagles, the true story of how two employees of Ross Perot were rescued from Iran during the revolution of 1979. This book was made into a miniseries with Richard Crenna as Ross Perot and Burt Lancaster as Colonel "Bull" Simons.

Ken Follett then surprised readers by radically changing course with The Pillars of the Earth, a novel about building a cathedral in the Middle Ages. Published in September 1989 to rave reviews, it was on the New York Times bestseller list for eighteen weeks. It also reached the No. 1 position on lists in Canada, Great Britain, and Italy, and was on the German bestseller list for six years. It was voted the third greatest book ever written by 250,000 viewers of the German television station ZDF in 2004, beaten only by The Lord of the Rings and the Bible. When The Times (London) asked its readers to vote for the sixty greatest novels of the last sixty years, The Pillars of the Earth was placed at No. 2, after To Kill a Mockingbird. (The sequel, World Without End, was No. 23 on the same list.) In November 2007, Pillars became the most popular choice of the Oprah Winfrey Book Club, returning to No. 1 on the New York Times bestseller list. The miniseries, produced by Ridley Scott and starring Ian McShane and Matthew Macfadyen, is due for broadcast in 2010.

After Pillars, Ken Follett abandoned the straightforward spy genre for awhile, but his stories still had powerful narrative drive, strong women characters, and elements of suspense and intrigue. Night over Water, A Dangerous Fortune, and A Place Called Freedom followed.

Then he returned to the thriller. The Third Twin was a scorching suspense novel about a young woman scientist who stumbles across a secret experiment in genetic engineering. Miniseries rights were sold to CBS for $1,400,000, a record price for four hours of television. The series, starring Kelly McGillis and Larry Hagman, was broadcast in the United States in November 1997. (Ken Follett appeared briefly as the butler.) In Publishing Trends' annual survey of international fiction bestsellers for 1997, The Third Twin was ranked No. 2 in the world, beaten only by John Grisham's The Partner.

The Hammer of Eden, another nail–biting contemporary suspense story, came in 1998. Code to Zero (2000), about brainwashing and rocket science in the fifties, went to No. 1 on bestseller lists in the United States, Germany, and Italy, and film rights were snapped up by Doug Wick, producer of Gladiator, in a seven-figure deal. Jackdaws (2001), a World War II spy story in the tradition of Eye of the Needle, won the Corine Prize for 2003. Film rights were sold to Dino De Laurentiis. Hornet Flight, about two young people who escape from German–occupied Denmark in a Hornet Moth biplane, is loosely based on a true story. It was published in December 2002. Whiteout, a contemporary thriller about the theft of a dangerous virus from a laboratory, was published in 2004 and made into a miniseries in 2009.

World Without End, the long–awaited sequel to The Pillars of the Earth, was published in October 2007. It is set in Kingsbridge, the fictional location of the cathedral in Pillars, and features the descendants of the original characters at the time of the Black Death. It was a No.1 bestseller in Italy, the United States, the United Kingdom, Germany, France, and Spain, where it was the fastest–selling book ever published in the Spanish language, outstripping the last Harry Potter book.

In 2008 Ken was awarded the Olaguibel Prize by the Colegio Oficial de Arquitectos Vasco–Navarro for contributing to the promotion and awareness of architecture. A statue of him by the distinguished Spanish sculptor Casto Solano was unveiled in January 2008 outside the Cathedral of Santa Maria in the Basque capital of Vitoria–Gasteiz in northern Spain.

His next project is his most ambitious yet. The Century Trilogy will tell the entire history of the twentieth century as seen through the eyes of five linked families: one American, one English, one German, one Russian, and one Welsh. The first book, Fall of Giants, focusing on the First World War and the Russian Revolution, will be published worldwide simultaneously on September 28, 2010. He is already at work on the second book, provisionally titled The Winter of the World, about the Spanish civil war, the Second World War, and the development of nuclear weapons.

Ken Follett is married to Barbara Follett, a political activist who was the member of Parliament for Stevenage in Hertfordshire for thirteen years and minister for culture in the government of Gordon Brown. They live in a rambling rectory in Stevenage and also have an eighteenth-century town house in London and a beach house in Antigua. Ken Follett is a lover of Shakespeare and is often seen at London productions of the Bard's plays. An enthusiastic amateur musician, he plays bass guitar in a band called Damn Right I Got the Blues and appears occasionally with the folk group Clog Iron playing a bass balalaika.

He was chair of the National Year of Reading 1998 – 99, a British government initiative to raise literacy levels. He was president of the charity Dyslexia Action for ten years. He is a member of The Welsh Academy, a board director of the National Academy of Writing, and a fellow of the Royal Society of Arts. In 2007 he was awarded an honorary Doctorate in Literature (D.Litt.) by the University of Glamorgan as well as similar degrees by Saginaw Valley State University, Michigan—where his papers are kept in the Ken Follett Archive—and by the University of Exeter in 2008. He is active in numerous Stevenage charities and was a governor of Roebuck Primary School for ten years, serving as chair of governors for four of those years.

He was born on June 5, 1949, in Cardiff, Wales, the son of a tax inspector. He was educated at state schools and