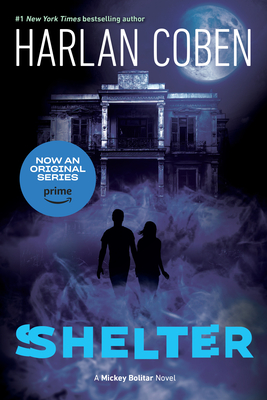 This is book number 1 in the A Mickey Bolitar Novel series.

Mickey Bolitar's father just died, his
mother is in rehab, and he's staying with his uncle Myron. When a
girl that he just met goes missing, Mickey and his friends team up to
find her. Coben does a masterful job of writing for teens without
writing down to them. This is the perfect book to introduce them to
his books, and they'll be able to graduate to the Myron Bolitar books
in no time.

Mickey Bolitar's year can't get much worse. After witnessing his father's death and sending his mom to rehab, he's forced to live with his estranged uncle Myron and switch high schools. Fortunately, he's met a great girl, Ashley, and it seems like things might finally be improving. But then Ashley vanishes. Mickey follows Ashley's trail into a seedy underworld that reveals that Ashley isn't who she claimed to be. And neither was Mickey's father. Soon Mickey learns about a conspiracy so shocking that it leaves him questioning everything about the life he thought he knew.

First introduced to readers in Harlan Coben's novel Live Wire Mickey Bolitar is as quick-witted and clever as his uncle Myron, and eager to go to any length to save the people he cares about. Follow Mickey Bolitar on his next adventure in Seconds Away!

Harlan Coben (www.harlancoben.com) is the #1 New York Times bestselling author of numerous adult novels, as well as the two young adult novels, SHELTER and SECONDS AWAY. He has won the Edgar Award, Shamus Award, and Anthony Award--the first author to receive all three. His books are published in forty-one languages--with over 50 million copies in print worldwide--and have been #1 bestsellers in over a dozen countries. He lives in New Jersey.