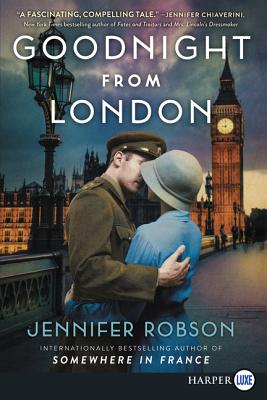 From USA Today bestselling author Jennifer Robson—author of Moonlight Over Paris and Somewhere in France—comes a lush historical novel that tells the fascinating story of Ruby Sutton, an ambitious American journalist who moves to London in 1940 to report on the Second World War, and to start a new life an ocean away from her past.

In the summer of 1940, ambitious young American journalist Ruby Sutton gets her big break: the chance to report on the European war as a staff writer for Picture Weekly newsmagazine in London. She jumps at the chance, for it's an opportunity not only to prove herself, but also to start fresh in a city and country that know nothing of her humble origins. But life in besieged Britain tests Ruby in ways she never imagined.

Although most of Ruby's new colleagues welcome her, a few resent her presence, not only as an American but also as a woman. She is just beginning to find her feet, to feel at home in a country that is so familiar yet so foreign, when the bombs begin to fall.

As the nightly horror of the Blitz stretches unbroken into weeks and months, Ruby must set aside her determination to remain an objective observer. When she loses everything but her life, and must depend upon the kindness of strangers, she learns for the first time the depth and measure of true friendship—and what it is to love a man who is burdened by secrets that aren’t his to share.

Goodnight from London, inspired in part by the wartime experiences of the author’s own grandmother, is a captivating, heartfelt, and historically immersive story that readers are sure to embrace.

Jennifer Robson is the USA Today and #1 Toronto Globe & Mail bestselling author of Somewhere in France, After the War is Over and Moonlight Over Paris. She holds a doctorate from Saint Antony’s College, University of Oxford. She lives in Toronto with her husband and young children.

“Goodnight from London is another masterpiece by Jennifer Robson.”
— Joy Callaway, author of The Fifth Avenue Artists Society

“Goodnight from London captures both the despair and the triumphant spirit of war-torn London through the eyes of Ruby Sutton, an American journalist, with precision and wit. Robson’s novel is an ode to the heroes of WWII, a touching love story, and a marvel.”
— Fiona Davis, author of THE DOLLHOUSE

“Jennifer Robson’s Goodnight from London is a beautifully written “you are there!” novel. I was pulled right into the characters’ struggles, victories and catastrophes in World War II England and France. Every time we say ‘good book!’ I’ll be thinking of this inspiring story.”
— Karen Harper, New York Times bestselling author of The Royal Nanny

“Enriched with authentic period detail, Goodnight from London is a fascinating, compelling tale of a determined young journalist in World War II London who not only observes but experiences firsthand the harrowing effects of the Blitz-and discovers love when she least expects it.”
— Jennifer Chiaverini, New York Times bestselling author of Fates and Traitors and Mrs. Lincoln's Dressmaker

“Historical fiction fans are in for a real treat with Goodnight from London. Jennifer Robson has created a remarkable heroine in Ruby Sutton, a young American journalist who arrives in London and finds her voice as well as a family and love during the heartbreak and devastation of the Blitz. This is a vivid, atmospheric portrait of the survival of love amidst the survival of war. This is my favorite of Robson’s books and I’ve loved them all!”
— Renee Rosen, author of Windy City Blues

“… Robson manages the familiar elements skillfully, relying on a sharply detailed evocation of the Blitz through the fresh eyes of a young American and on characters who defy their types with just the right splash of individuality.”
— Booklist

“Dedicated fans of World War II fiction will be surprised by new details about life during the Blitz that Robson presents here. Readers seeking history and romance will find plenty of both here.”
— Library Journal

“This novel has everything that I want in a good historical fiction book... This is my favorite book by this author so far and I look forward to whatever she writes in the future.”
— Girl Who Reads.com