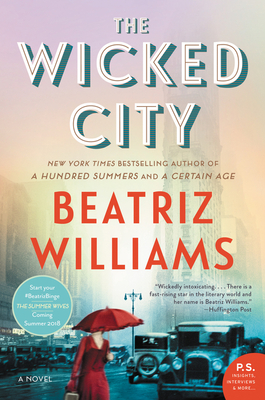 By Beatriz Williams
$16.99
Able to Backorder

This is book number 1 in the The Wicked City series series.

Beatriz Williams is rapidly becoming one of my favorite authors. She's a master at telling two compelling stories at once. In her newest, she moves away from the upper society Schuyler family, and introduces us to Gin Kelly, a flapper recently moved to New York City. She's escaped Appalachia and terrible stepfather.  Gin quickly finds that leaving her home town isn't as simple as just leaving town. Gin is a chameleon straddling three worlds, the world of NYC speakeasies, the world of her Appalachian routes, and her day job working in the typing pool.  She's also one of Williams's most intriguing heroines.

From the New York Times bestselling author of A Certain Age, a deliciously spicy new Jazz Age adventure and the first book of a breathtaking new trilogy by bestselling author Beatriz Williams. Two generations of women are brought together inside a Greenwich Village apartment —a flapper hiding an extraordinary past, and a modern-day Manattanite forced to start her life anew.

When she discovers her banker husband has been harboring a secret life, Ella Gilbert escapes her SoHo loft for a studio in Greenwich Village. Her charismatic musician neighbor, Hector, warns her to stay out of the basement after midnight, when a symphony of mysterious noise strikes up—laughter, clinking glasses, jazz piano, the occasional bloodcurdling scream—even though the space has been empty for decades. Back in the Roaring Twenties, the basement was home to one of the city’s most notorious speakeasies.

In 1924, Geneva “Gin” Kelly, a quick-witted flapper from the hills of western Maryland, is a regular at this Village hideaway. Caught up in a raid, Gin lands in the office of Prohibition enforcement agent Oliver Anson, who persuades her to help him catch her stepfather, Duke Kelly, one of the biggest bootleggers in Appalachia.

But Gin is nobody’s fool. She strikes a risky bargain with the taciturn, straight-arrow Revenue agent, and their alliance rattles Manhattan society to its foundations, exposing secrets that shock even this free-spirited redhead.

As Ella unravels the strange history of her new building—and the family thread that connects her to Geneva Kelly—she senses the Jazz Age spirit of her exuberant predecessor invading her own shy nature, in ways that will transform her existence in the wicked city.

Beatriz Williams is the bestselling author of eleven novels, including The Golden Hour, The Summer Wives, A Hundred Summers, and The Wicked Redhead. A native of Seattle, she graduated from Stanford University and earned an MBA in finance from Columbia University. She lives with her husband and four children near the Connecticut shore, where she divides her time between writing and laundry.