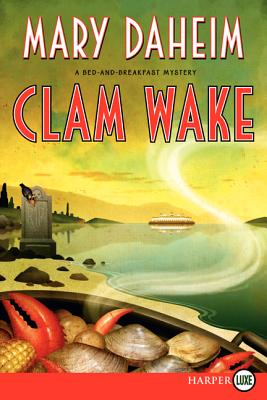 This is book number 29 in the Bed-and-Breakfast Mysteries series.

With the holidays gone and Hillside Manor almost empty, Innkeeper Judith McMonigle Flynn has a bad case of the blues. A housesitting stint at her aunt and uncle’s retirement home on Whoopee Island with cousin Renie seems like the ideal pick-me-up. Surrounded by retirees in the off-season sounds peaceful and pleasant--or so the duo thinks. But it isn’t long before a dead body pops up in their vicinity. Not surprising in an area full of older folks—until they learn it wasn’t a bad ticker that did in the victim, but a very sharp knife. With clouds of suspicion hovering over her and Renie, Judith reluctantly begins sleuthing—if only to prove they didn’t commit the crime.

But what she finds is puzzling. The victim reputedly didn’t have an enemy in the world--except for the killer. Digging for clams and answers, the cousins discover that retirement can be deadly—at least among the eclectic, eccentric residents of Obsession Shores.

Mary Richardson Daheim is a Seattle native with a communications degree from the University of Washington. Realizing at an early age that getting published in books with real covers might elude her for years, she worked on daily newspapers and in public relations to help avoid her creditors. She lives in her hometown in a century-old house not unlike Hillside Manor, except for the body count. Daheim is also the author of the Alpine mystery series, the mother of three daughters, and has three grandchildren.