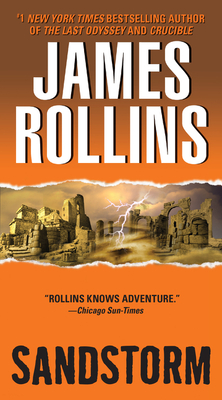 More heart-stopping action and suspense from the bestselling author of Amazonia and Subterranean. . . . “Rollins writes with intelligence, clarity, and a refreshing sense of humor.”—Kirkus Reviews

In his five previous thrillers, James Rollins, the king of speculative adventure writing, has taken readers on mind-expanding journeys spanning from the top of the world to deep within the earth’s surface. In this latest voyage of imagination combining hard science with explosive page-turning excitement—his most breathtaking yet—he explores the mysterious sands of the Arabian peninsula.

Twenty years ago, a wealthy British financier disappeared near Ubar, the fabled lost city buried beneath the sands of Oman. Now, an expedition of scientists, led by the financier’s daughter, is finally setting off for the legendary metropolist to unlock the desert’s secrets. What they find, however, is more beautiful than they ever dreamed—and far deadlier. Within Ubar is a powerful energy source that could fuel the entire earth above—if it can be harnessed. But before they can resurface, the explorers become trapped. For the same life-giving force that can save the world is about to set off a giant, sweeping storm awesome enough to annihilate everything in its wake . . .

James Rollins is the author of international thrillers that have been translated into more than forty languages. His Sigma series has been lauded as one of the "top crowd pleasers" (New York Times) and one of the "hottest summer reads" (People magazine). In each novel, acclaimed for its originality, Rollins unveils unseen worlds, scientific breakthroughs, and historical secrets--and he does it all at breakneck speed and with stunning insight. He lives in the Sierra Nevada mountains.