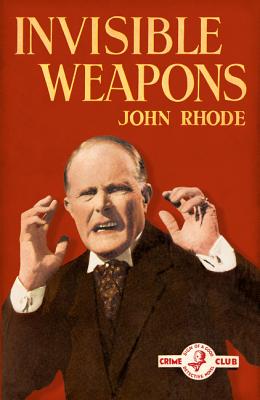 A classic crime novel by one of the most highly regarded exponents of the genre.

The murder of old Mr Fransham while washing his hands in his niece's cloakroom was one of the most astounding problems that ever confronted Scotland Yard. Not only was there a policeman in the house at the time, but there was an ugly wound in the victim's forehead and nothing in the locked room that could have inflicted it.

The combined efforts of Superintendent Hanslet and Inspector Waghorn brought no answer and the case was dropped. It was only after another equally baffling murder had been committed that Dr Lancelot Priestley's orderly and imaginative deductions began to make the connections that would solve this extraordinary case.

John Rhode was a pseudonym for the author Cecil John Charles Street (1884-1964), who also wrote as Miles Burton and Cecil Waye. Having served in the British Army as an artillery officer during the First World War, rising to the rank of Major, he began writing non-fiction before turning to detective fiction, and produced four novels a year for thirty-seven years. The Sunday Times said 'he must hold the record for the invention of ingenious forms of murder', and the Times Literary Supplement described him as 'standing in the front rank of those who write detective fiction'. Rhode's first series novel, The Paddington Mystery (1925), introduced Dr Lancelot Priestley, who went on to appear in 72 novels, many for Collins Crime Club.