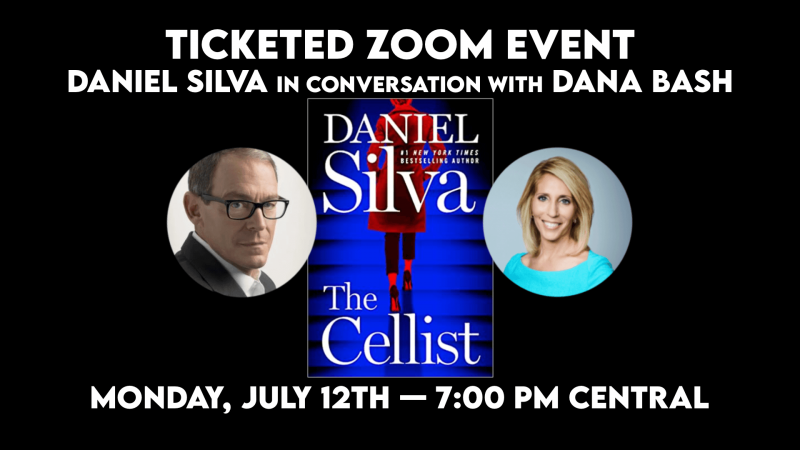 Murder By The Book is partnering with Marcus JCC of Atlanta & The National JCC Literary Consortium for an In Your Living Room Live event to celebrate the launch of Daniel Silva’s The Cellist.

This is a ticketed event, however it couldn't be easier to get a ticket - just purchase a copy of The Cellist from Murder By The Book! When we process your order we'll send you details on how to register for the event.

Daniel Silva is the award-winning, #1  New York Times bestselling author of The Unlikely Spy, The Mark of the Assassin, The Marching Season, The Kill Artist, The English Assassin, The Confessor, A Death in Vienna, Prince of Fire, The Messenger, The Secret Servant, Moscow Rules, The Defector, The Rembrandt Affair, Portrait of a Spy, The Fallen Angel, The English Girl, The Heist, The English Spy, The Black Widow, House of Spies, The Other Woman, The New Girl and The Order.  He is best known for his long-running thriller series starring spy and art restorer Gabriel Allon. Silva’s books are critically acclaimed bestsellers around the world and have been translated into more than 30 languages. He resides in Florida with his wife, television journalist Jamie Gangel, and their twins, Lily and Nicholas. For more information visit www.danielsilvabooks.com

Dana Bash is CNN's chief political correspondent and co-anchor of State of the Union with Jake Tapper and Dana Bash, the network's Sunday morning newsmaker show. Bash is based in Washington, DC, where she covers both campaigns and Congress and regularly serves as a moderator for CNN's political town hall specials.