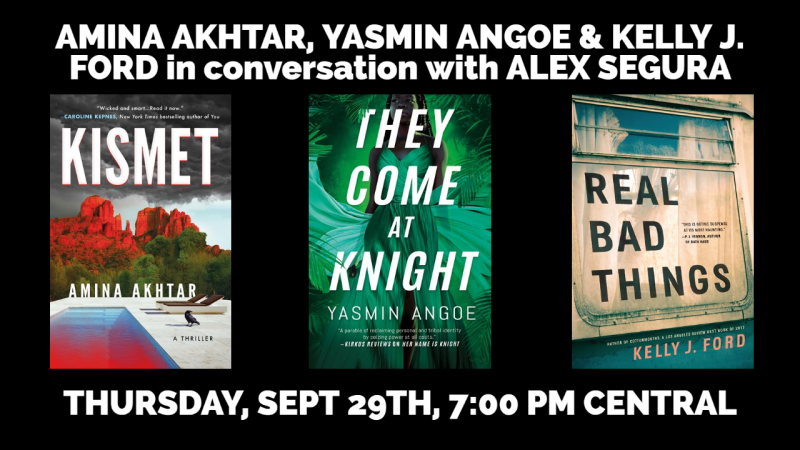 Amina Akhtar is a former fashion writer and editor. Her satirical first novel, #FashionVictim, drew critical acclaim and was covered in the Wall Street Journal, Forbes, Martha Stewart Living, Entertainment Weekly, Fashionista, Book Riot, CrimeReads, and more. Akhtar has worked at Vogue, Elle, the New York Times, and New York Magazine, where she was the founding editor of the women's blog The Cut. She's written for numerous publications, including Yahoo Style, Fashionista, xoJane, Refinery29, Billboard, and more. She currently lives not too far from the Sedona vortexes.

Yasmin Angoe is the author of Her Name Is Knight and a first-generation Ghanaian American currently residing in South Carolina with her family. She's served in education for nearly twenty years and works as a developmental editor. Yasmin received the 2020 Eleanor Taylor Bland Crime Fiction Writers of Color Award from Sisters in Crime, of which she is a member. She is also a proud member of numerous crime, mystery, and thriller organizations like Crime Writers of Color and International Thriller Writers. You can find her at https: //yasminangoe.com, on Twitter at @yasawriter, and on Instagram at @author_yas.

Kelly J. Ford is the author of the award-winning Cottonmouths, a novel of "impressive depths of character and setting" according to the Los Angeles Review, which named it one of their Best Books of 2017. An Arkansas native, Kelly writes about the power and pitfalls of friendship, the danger of long-held secrets, and the transcendent grittiness of the Ozarks and their surrounds. She lives in Vermont with her wife and cat.

From Amina Akhtar comes a viciously funny thriller about wellness--the smoothies, the secrets, and the deliciously deadly impulses.

From the author of Cottonmouths, a Los Angeles Review Best Book of 2017, comes an evocative suspense about the cost of keeping secrets and the dangers of coming home.

Beneath the roiling waters of the Arkansas River lie dead men and buried secrets.

They Come at Knight (Paperback)

Yasmin Angoe's They Come at Knight is the heart-pounding second installment in the Nena Knight series about an intrepid female assassin who will stop at nothing to protect her family.

Her Name Is Knight (Paperback)