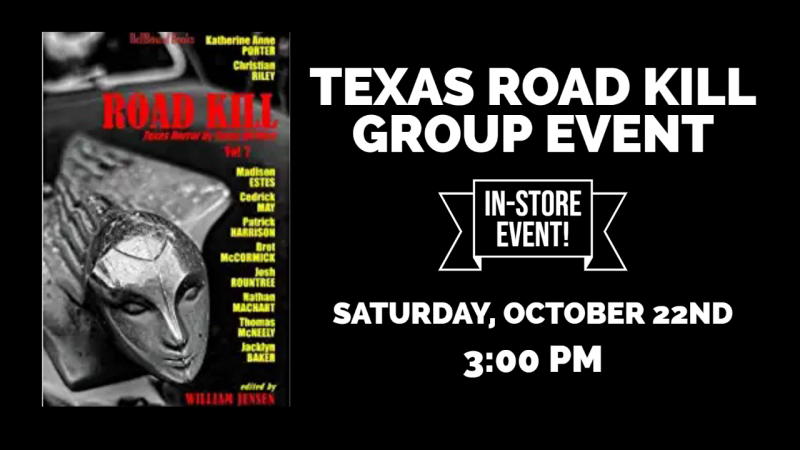 An East End Houston native, Thomas H. McNeely has published Pictures of the Shark: Stories (Texas Review Press, 2022) and Ghost Horse (winner of the Gival Press Novel Award, 2014).   In a starred review, Kirkus calls Pictures of the Shark "an emotionally taut and often haunting collection." He has received fellowships for his writing from the National Endowment for the Arts, the Wallace Stegner Program, and the J. Frank Dobie Paisano Program, and published fiction and non-fiction in The Atlantic, Texas Monthly, Ploughshares, and many other magazines; his work has been noted in the Pushcart, O. Henry, and Best American Short Stories anthologies.   He currently teaches at the Stanford Online Writing Studio and Emerson College, Boston.

Madison Estes is a writer and freelance editor. She is a recipient of the 2020 Ladies of Horror Fiction grant and the Mystery Writers of America Helen McCloy scholarship. She is the editor of Road Kill: Texas Horror by Texas Writers Vol. 6. She lives in southeast Texas and has three dogs. She posts reviews, writing advice, horror commentary and vlogs on her You Tube channel. You can find her on Twitter @madisonestes or Instagram @madisonpaigeestes or visit her website authormadisonestes.wordpress.com.

Carmen Gray is a Native Texan and had her first story (science fiction) published in Children's Digest at age 10. Writing has always been one of her favorite forms of expression. Carmen enjoys crafting fiction, employing elements of the supernatural and magical realism. Her Mexican American heritage and the Spanish language is often reflected in the characters of her stories. You can also find her poetry on her blog: www.walkersonthejourney.com

Cedrick May is a writer, filmmaker, and native Texan who lives and teaches in the Dallas/Fort Worth area. After nearly two decades of writing academic books and essays, he has returned to his first and foremost love—writing speculative fiction. In particular, he writes horror, supernatural thrillers, and tales of the Weird Wild West. He is currently hard at work on more stories of the Weird West and the supernatural while finishing his first independent feature film, The Awakening. More of his fiction can be found at Aphelion Webzine.

Patrick C. Harrison III (PC3, if you prefer) is an author of horror, splatterpunk, and all forms of speculative fiction. He is the author of perhaps the most depraved book ever written—Grandpappy—as well as A Savage Breed, Vampire Nuns Behind Bars, and others. His works can also be found in numerous anthologies. He is the Splatterpunk Award-winning editor (with Jarod Barbee) of And Hell Followed. He is the creative force that brought the world the Splatter Western series of books in 2020 and beyond. You can keep track of him and his works at pc3horror.com.

William Jensen is the author of the novel Cities of Men. His short fiction has appeared in North Dakota Quarterly, The Texas Review, Mystery Tribune, and elsewhere. He is the editor of Texas Books in Review and Southwestern American Literature.

Bret A. McCormick is an author, artist and filmmaker based in Bedford, TX. His schlock cinema offering The Abomination (1986) has an international cult following. In real life, McCormick is an unapologetic book sniffer.

John Kojak is a Navy Veteran and graduate of The University of Texas who grew up in oily little towns around Houston during the Boom-and-Bust eras of the 1970s and ’80s. He still lives there, with a nice woman and a mean cat. His short stories have appeared in a variety of books and magazines, including Pulp Modern, Pulp Adventures, Switchblade, EconoClash Review, Mystery Weekly, Road Kill: Texas Horror By Texas Writers Vol 5, and The Toilet Zone: Number Two among others.