Mark Pryor in conversation with Celeste Connally (aka S.C. Perkins) - In Store 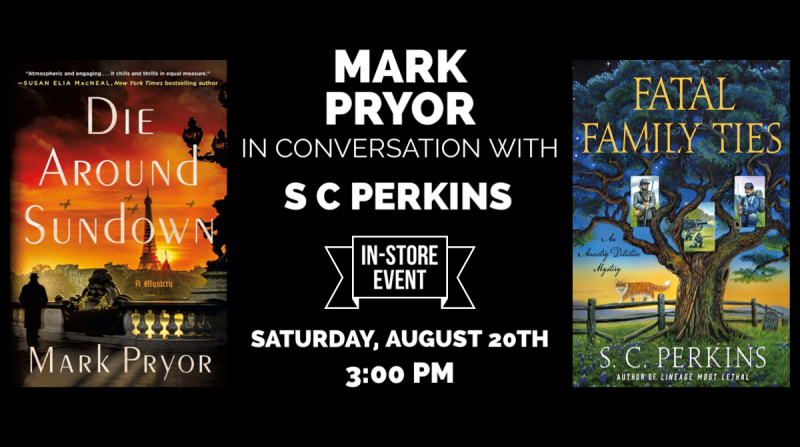 Mark Pryor will sign and discuss Die Around Sundown ($27; Minotaur).

Mark Pryor is a former newspaper reporter from England, and now a prosecutor with the Travis County District Attorney's Office, in Austin, Texas. He is the author of the Hugo Marston mystery series, set in Paris, London, and Barcelona. Mark is also the author of the psychological thrillers, Hollow Man, and its sequel, Dominic. As a prosecutor, he has appeared on CBS News's 48 Hours and Discovery Channel's Discovery ID: Cold Blood. He lives in Austin, Texas.

Celeste Connally (aka S.C. Perkins) is a fifth-generation Texan who grew up hearing fascinating stories of her ancestry and eating lots of great Tex-Mex, both of which inspired the plot of her debut mystery novel. Murder Once Removed,  was the winner of the 2017 Malice Domestic Best First Traditional Mystery competition. When she’s not writing, she’s likely outside in the sun, on the beach, or riding horses. S.C. Perkins also writes historical mysteries as Celeste Connally.

If you'd like your copy personalized / inscribed, please include personalization information in the order comments.

Mark Pryor's Die Around Sundown is the first entry in an exciting mystery series set in Paris during World War II, where a detective is forced to solve a murder while protecting his own secrets.