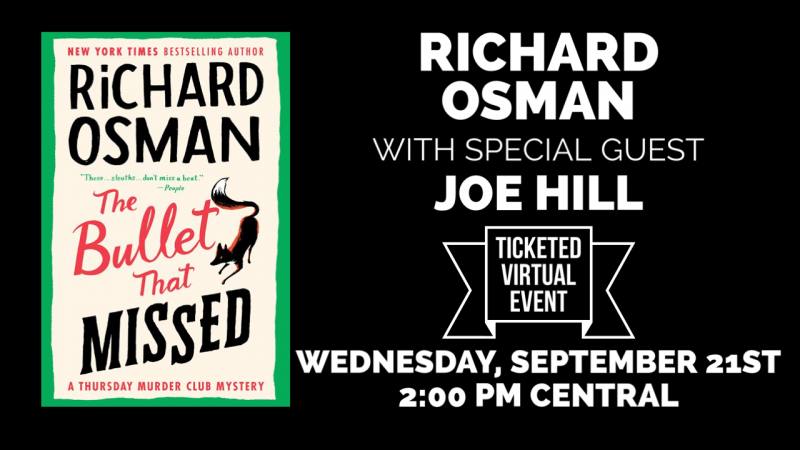 Signed copies of The Bullet That Missed available for preorder!

Join us as we team up with The King's English and One More Page to host Joe Hill in conversation with Richard Osman about The Bullet That Missed!

Joe Hill is the #1 New York Times bestselling author of The Fireman and Heart-Shaped Box. The Black Phone, a film based on his short story and starring Ethan Hawke, was a global smash. Much of Hill's fiction has been adapted for the movies and television, including the hit Netflix series, Locke & Key, based on his long-running comic book, and AMC's NOS4A2, adapted from his third novel. He lives in New England with his wife and sons.

This is a ticketed event, however it couldn't be easier to get a ticket - just purchase a copy of The Bullet That Missed from Murder By The Book!

If you've purchased a copy of The Bullet That Missed from us, you will be emailed a Crowdcast link so that you can view and participate in the event.

The Bullet That Missed: A Thursday Murder Club Mystery (Hardcover)

A new mystery is afoot in the third book in the Thursday Murder Club series from million-copy bestselling author Richard Osman.