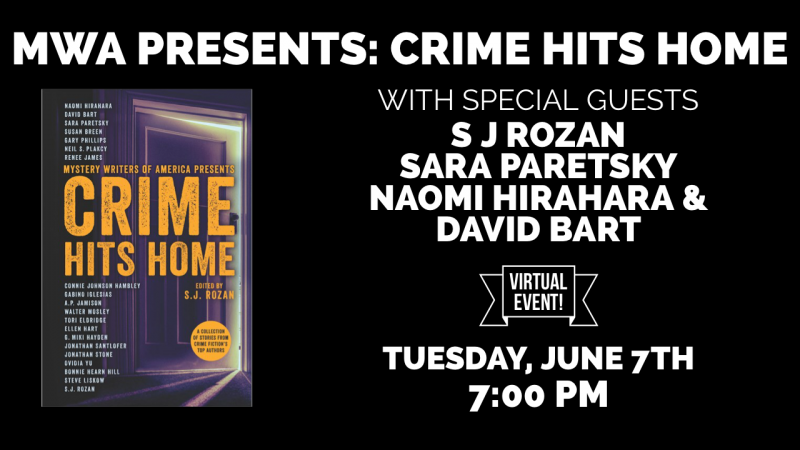 S. J. Rozan is the author of Paper Son and many other crime novels. She has won multiple awards for her fiction, including the Edgar, Shamus, Anthony, Nero, and Macavity, the Japanese Maltese Falcon, and the Private Eye Writers of America Lifetime Achievement Award. S. J. was born and raised in the Bronx and now lives in lower Manhattan.

Naomi Hirahara is the Edgar Award-winning author of the Mas Arai mystery series, including Summer of the Big Bachi, which was a Publishers Weekly Best Book of the Year and one of Chicago Tribune's Ten Best Mysteries and Thrillers; Gasa Gasa Girl; Snakeskin Shamisen; and Hiroshima Boy. She is also the author of the LA-based Ellie Rush mysteries. A former editor of The Rafu Shimpo newspaper, she has co-written non-fiction books like Life after Manzanar and the award-winning Terminal Island: Lost Communities of Los Angeles Harbor.

The Stanford University alumna was born and raised in Altadena, CA; she now resides in the adjacent town of Pasadena, CA.

Sara Paretsky is the New York Times bestselling author of twenty-three novels, including the renowned V.I. Warshawski series. She is one of only four living writers to have received both the Grand Master Award from the Mystery Writers of America and the Cartier Diamond Dagger from the Crime Writers Association of Great Britain. She lives in Chicago.

David Bart's latest fiction, "The World's Oldest Living Detective", is in CRIME HITS HOME, a Mystery Writers of America anthology edited by the highly acclaimed author S.J. Rozan. David is a long-time contributor to ALFRED HITCHCOCK MYSTERY MAGAZINE, has published in ELLERY QUEEN MYSTERY MAGAZINE and has had stories published in four Mystery Writers of America anthologies, Fedora III anthology, six stories in the Bould Award anthology and many in MYSTERY MAGAZINE. An early story of David's, "Under the Playground", was published in a French anthology, HISTOIRES D'HOMICIDES A DOMICILE. He lives in the East mountains of New Mexico with his wife, Linda, and temperamental rescue cat, Ripley. He loves cabernet wine of the boxed type, chocolate of the dark variety and Mexican food as hot as is allowed by law. He hikes, kayaks and travels when not writing.

The newest anthology from Mystery Writers of America explores the theme of home and the crimes that endanger it, with stories by Ellen Hart, Naomi Hirahara, Walter Mosley, Sara Paretsky and more.