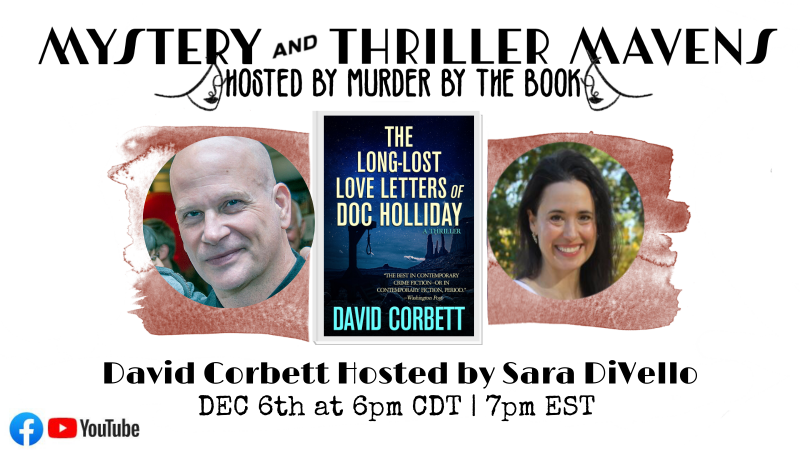 David Corbett is the author of numerous critically acclaimed works of fiction: The Devil's Redhead (nominee: Anthony and Barry Awards for Best First Novel) Done for a Dime (NY Times Notable Book; Macavity Award nominee, Best Novel; named "one of the two or three best American crime novels I have ever read" by Patrick Anderson of the Washington Post) Blood of Paradise (nominated for numerous awards, including the Edgar, and named both one of the Top Ten Mysteries and Thrillers of 2007 by the Washington Post and a San Francisco Chronicle Notable Book) Do They Know I'm Running? (Spinetingler Award, Best Novel-Rising Star Category ("a rich, hard-hitting epic"-PW, starred review). The Mercy of the Night ("Superlative hard-boiled crime fiction"-Booklist, Starred Review) The Devil Prayed and Darkness Fell (novella) Thirteen Confessions (Stories) The Long-Lost Love Letters of Doc Holliday His short fiction and poetry have appeared in journals as diverse as Mission and Tenth, The Smoking Poet, and San Francisco Noir, and his stories have twice been selected for inclusion in Best American Mystery Stories. His book on the craft of characterization, The Art of Character, has been called "a writer's bible," and it will soon appear in translation in both Spanish and Chinese. A follow-up, focusing on complex motivation, The Compass of Character, appeared in November 2019. He's written numerous articles on the craft and theory of fiction for the New York Times, Narrative, Bright Ideas, Zyzzyva, MovieMaker, and other outlets. Prior to his career as a novelist, he worked as a private investigator for the firm of Palladino & Sutherland in San Francisco, and played a significant role in such headline litigations as The Peoples' Temple Trial, the first Michael Jackson child molestation scandal, the Cotton Club Murder Case, and many others. He is married and splits his time between northern California and coastal Norway. For more, visit www.davidcorbett.com.

Sara DiVello is a yoga teacher by day, mystery writer by night. She’s a life-long passionate reader and mystery-lover. Sara loves chatting all things books, the joy of reading, the craft of writing, and connecting readers to their favorite authors…or introducing them to their new favorites! She has interviewed over 100 mystery and thriller authors--from celebs to debuts--and created the “Mystery and Thriller Mavens” Facebook Group, a free, online book group where readers can watch and participate in interviews, enter giveaways, and dish about their latest books. All are welcome. You can also find out more at https://www.mysteryandthrillermavens.com/.

The most notorious love letters in American history--supposedly destroyed a century ago--mysteriously reappear, and become the coveted prize in a fierce battle for possession that brings back to life the lawless world evoked in the letters themselves.