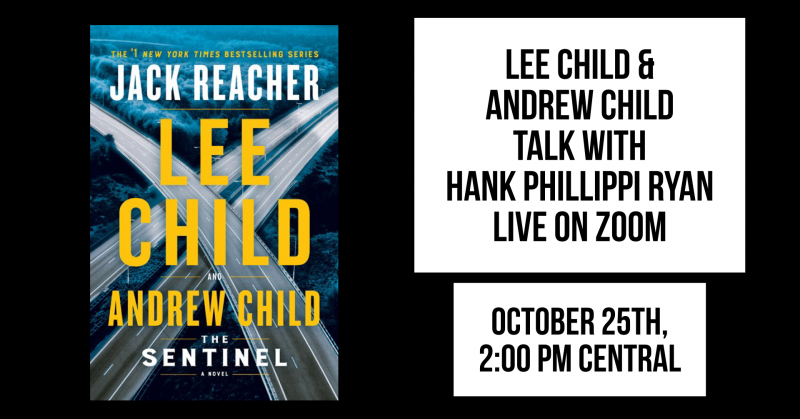 Join us online for a discussion of The Sentinel, the latest book in the Jack Reacher series.

This is a ticketed event. Zoom access will be granted with the purchase of a copy of the The Sentinel from Murder By The Book. Zoom details will be emailed on Friday, October 23rd.

All copies of The Sentinel will be signed by both authors.

As always, Reacher has no particular place to go, and all the time in the world to get there. One morning he ends up in a town near Pleasantville, Tennessee.

But there’s nothing pleasant about the place.

In broad daylight Reacher spots a hapless soul walking into an ambush. “It was four against one” . . . so Reacher intervenes, with his own trademark brand of conflict resolution.

The man he saves is Rusty Rutherford, an unassuming IT manager, recently fired after a cyberattack locked up the town’s data, records, information . . . and secrets. Rutherford wants to stay put, look innocent, and clear his name.

Reacher is intrigued. There’s more to the story. The bad guys who jumped Rutherford are part of something serious and deadly, involving a conspiracy, a cover-up, and murder—all centered on a mousy little guy in a coffee-stained shirt who has no idea what he’s up against.

Rule one: if you don’t know the trouble you’re in, keep Reacher by your side.

Lee Child is the author of twenty-four New York Times bestselling Jack Reacher thrillers, with fifteen having reached the #1 position, and the #1 bestselling complete Jack Reacher story collection, No Middle Name. Foreign rights in the Reacher series have sold in one hundred territories. A native of England and a former television director, Lee Child lives in New York City.

Andrew Child, who also writes as Andrew Grant, is the author of RUN, False Positive, False Friend, False Witness, Invisible, and Too Close to Home. Child and his wife, the novelist Tasha Alexander, live on a wildlife preserve in Wyoming.

USA Today bestselling author Hank Phillippi Ryan has won five Agatha Awards in addition to Anthony, Macavity, Daphne du Maurier, and Mary Higgins Clark Awards. As on-air investigative reporter for Boston's WHDH-TV, she's won thirty-seven Emmy Awards and many more journalism honors. Ryan is a past president of Sisters in Crime and founder of Mystery Writers of America University. Her novels include Trust Me, The Murder List, the Charlotte McNally series (starting with Prime Time), and the Jane Ryland series (which begins with The Other Woman).
She lives in Boston.