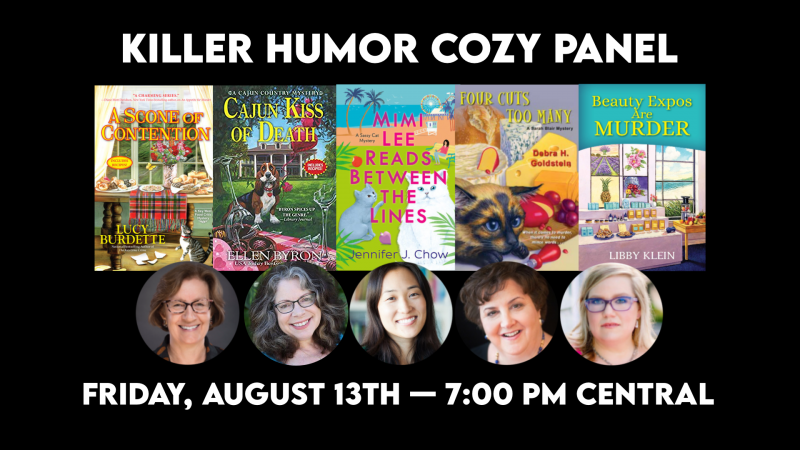 Clinical psychologist Lucy Burdette has published 15 mysteries, including the latest in the Key West food critic mysteries. Her books and stories have been shortlisted for Agatha, Anthony, and Macavity awards. She's a member of Mystery Writers of America and a past president of Sisters in Crime. She lives in Madison, CT and Key West, FL.

Agatha Award winner an d USA Today bestselling author Ellen Byron is a television writer, playwright, and freelance journalist. Her TV credits include Wings, Still Standing, and Just Shoot Me, and her written work has appeared in Glamour, Redbook, and Seventeen, among others. She lives in the Los Angeles area with her husband, their daughter, and the family's very spoiled rescue dog. A native New Yorker, Ellen still misses her hometown and still drives like a New York Cabbie.

Debra H. Goldstein is the author of the Sarah Blair Mysteries, as well as Should Have Played Poker and IPPY Award-winning Maze in Blue. Her short stories, including Anthony and Agatha-nominated The Night They Burned Ms. Dixie's Place, have appeared in numerous periodicals and anthologies. An active Birmingham, Alabama civic volunteer, Debra also serves on the national boards of Sisters in Crime and Mystery Writers of America and is president of SEMWA and past president of SinC's Guppy Chapter. Visit DebraHGoldstein.com to learn more.

Libby Klein graduated Lower Cape May Regional High School sometime in the '80s. Her classes revolved mostly around the culinary sciences and theater, with the occasional nap in Chemistry. She has worked as a stay at home mom, climbing the ladder up the ranks to the coveted position of Grandma. She also dabbles in the position of Vice President of a technology company, which mostly involves bossing other people around, making spreadsheets and taking out the trash. A member of Mystery Writers of America and Sisters in Crime, she writes from her Northern Virginia office while trying to keep her cat Figaro off her keyboard. Find her online at LibbyKleinBooks.com.

When a local teacher is found dead, LA’s newest pet groomer Mimi Lee finds herself in a pawful predicament—with her younger sister’s livelihood on the line.

Four Cuts Too Many (A Sarah Blair Mystery #4) (Mass Market)

When it comes to murder, there's no need to mince words . . .

Sarah Blair gets an education in slicing and dicing when someone in culinary school serves up a main corpse in Wheaton, Alabama...

Gluten-free baker Poppy McAllister is about to see the ugly side of beauty expos...

When a fierce rivalry between key lime pie bakers leads to a pastry chef's murder, food critic Hayley Snow is fit to be pied.

Hayley Snow's life always revolved around food. But when she applies to be a food critic for a Key West style magazine, she discovers that her new boss would be Kristen Faulkner, the woman Hayley caught in bed with her boyfriend.

Mimi Lee Gets a Clue (A Sassy Cat Mystery #1) (Paperback)

Nominated for a Lefty Award!

Mimi Lee is in over her head. There's her new Los Angeles pet grooming shop to run, her matchmaking mother to thwart, her talking cat Marshmallow to tend to—oh, and the murder of a local breeder to solve...now if only Mimi hadn't landed herself on top of the suspect list.

In the second installment of Maria DiRico's new Catering Hall Mystery series, Mia Carina is back in the borough of Queens, in charge of the family catering hall Belle View Banquet Manor, and keeping her nonna company. But some events--like murder at a shower--are not the kind you can schedule...

After her philandering husband’s boat went down, newly single Mia Carina went back to Astoria, the bustling Queens neighborhood of her youth. Living with her nonna and her oversized cat, Doorstop, she’s got a whole new life—including some amateur sleuthing . . .

Three Treats Too Many (A Sarah Blair Mystery #3) (Mass Market)

When a romantic rival opens a competing restaurant in small-town Wheaton, Alabama, Sarah Blair discovers murder is the specialty of the house . . .

Two Bites Too Many (A Sarah Blair Mystery #2) (Mass Market)

Far from a domestic goddess, Sarah Blair would rather catch bad guys than slave over a hot stove. But when a dangerous murder boils over in Wheaton, Alabama, catching the killer means leaving her comfort zone …

One Taste Too Many (A Sarah Blair Mystery #1) (Mass Market)

For culinary challenged Sarah Blair, there’s only one thing scarier than cooking from scratch—murder!

It's vintage Poppy when the gluten-free baker and B&B owner tries to solve a murder at a Cape May winery in Libby Klein's fifth deliciously witty, paleo-themed Poppy McAllister Mystery.

Cape May, New Jersey, is the site of a big culinary competition—and the knives are out . . .

When her sleepwalking aunt is accused of committing murder, Poppy McAllister finds out there's no rest for the weary . . .