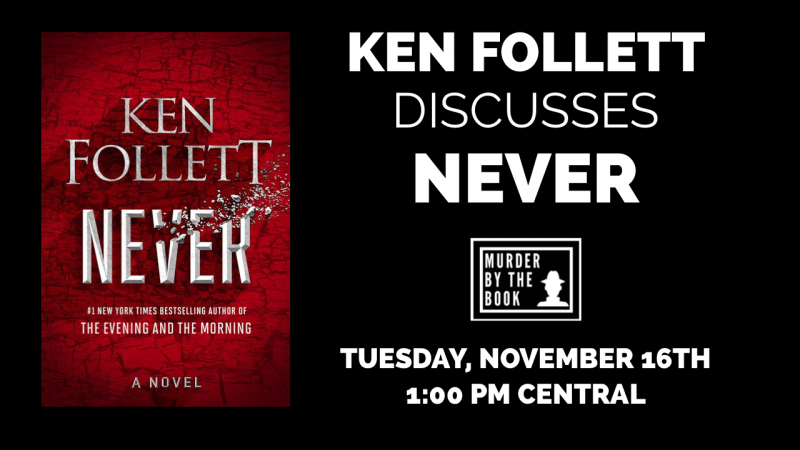 Murder By The Book is teaming up with Parnassus, Book People and King’s English to host a virtual event with Ken Follett.

This is a ticketed event, however it couldn't be easier to get a ticket - just purchase a copy of Never from Murder By The Book!

If you've purchased a copy of Never from us, you will be emailed details on how to participate in the event. (Please note we will NOT have signed books or bookplates for the event.)

Ken Follett is one of the world's best-loved authors, selling more than 178 million copies of his thirty-six books. Follett's first bestseller was Eye of the Needle, a spy story set in the Second World War. In 1989, The Pillars of the Earth was published and has since become Follett's most popular novel. It reached number one on bestseller lists around the world and was an Oprah's Book Club pick. Its sequels, World Without End and A Column of Fire, proved equally popular, and the Kingsbridge series has sold more than forty-seven million copies worldwide. Follett lives in Hertfordshire, England, with his wife, Barbara. Between them they have five children, six grandchildren, and two Labradors.

The new must-read epic from master storyteller Ken Follett: more than a thriller, it’s an action-packed, globe-spanning drama set in the present day.