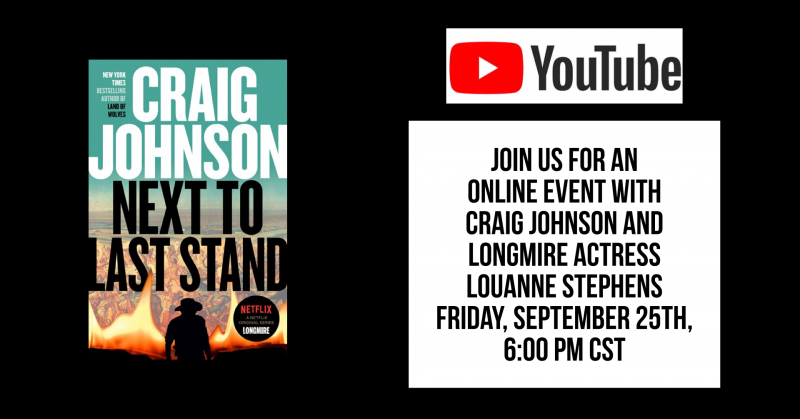 Signed copies available! This event will be held on our YouTube channel.

Craig Johnson is the New York Times bestselling author of the Longmire mysteries, the basis for the hit Netflix original series Longmire. He is the recipient of the Western Writers of America Spur Award for fiction, and his novella Spirit of Steamboat was the first One Book Wyoming selection. He lives in Ucross, Wyoming, population twenty-five.

Louanne Stephens, a native Texan, has been active in radio, television, film, and theater for over 30 years.  She has extensive film credits including  “Blaze” with Paul Newman and “Instinct, ” in which she played the role of Anthony Hopkins’s wife. Louanne’s television credits include the recurring, award winning role of Grandma Saracen in “Friday Night Lights,” as well as the role of Ruby on “Longmire” for six seasons, and hundreds of commercials.  On stage, Louanne has twice been selected as outstanding actress in a major role by the Dallas theater critics.

Next to Last Stand: A Longmire Mystery (Hardcover)

"It's the scenery—and the big guy standing in front of the scenery—that keeps us coming back to Craig Johnson's lean and leathery mysteries."
—The New York Times Book Review

Introducing Wyoming’s Sheriff Walt Longmire in this riveting novel from the New York Times bestselling author, the first in the Longmire mystery series