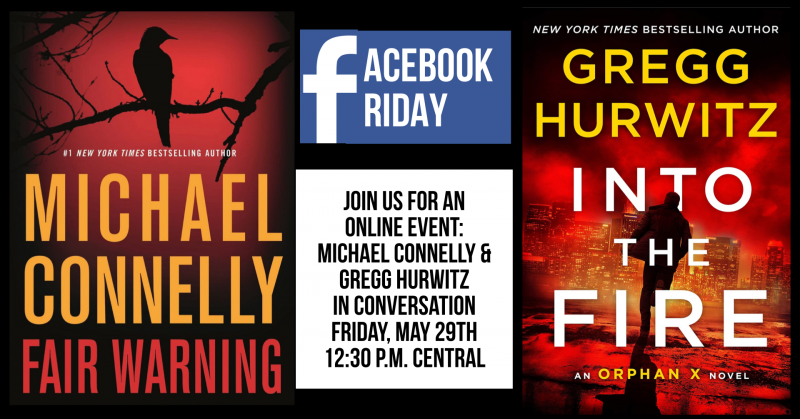 Michael Connelly was born in Philadelphia, PA on July 21, 1956. He moved to Florida with his family when he was 12 years old. Michael decided to become a writer after discovering the books of Raymond Chandler while attending the University of Florida. Once he decided on this direction he chose a major in journalism and a minor in creative writing — a curriculum in which one of his teachers was novelist Harry Crews.

After graduating in 1980, Connelly worked at newspapers in Daytona Beach and Fort Lauderdale, Florida, primarily specializing in the crime beat.  In Fort Lauderdale he wrote about police and crime during the height of the murder and violence wave that rolled over South Florida during the so-called cocaine wars. In 1986, he and two other reporters spent several months interviewing survivors of a major airline crash. They wrote a magazine story on the crash and the survivors which was later short-listed for the Pulitzer Prize for feature writing. The magazine story also moved Connelly into the upper levels of journalism, landing him a job as a crime reporter for the Los Angeles Times, one of the largest papers in the country, and bringing him to the city of which his literary hero, Chandler, had written.

Michael is the bestselling author of thirty-four novels and one work of non-fiction. With over seventy-four million copies of his books sold worldwide and translated into forty foreign languages, he is one of the most successful writers working today. His very first novel, The Black Echo, won the prestigious Mystery Writers of America Edgar Award for Best First Novel in 1992. In 2002, Clint Eastwood directed and starred in the movie adaptation of Connelly’s 1998 novel, Blood Work. In March 2011, the movie adaptation of his #1 bestselling novel, The Lincoln Lawyer, hit theaters worldwide starring Matthew McConaughey as Mickey Haller. His most recent #1 New York Times bestsellers include Dark Sacred Night, Two Kinds Of Truth, The Late Show, The Wrong Side Of Goodbye, The Crossing, The Burning Room, The Gods of Guilt, and The Black Box. Michael’s crime fiction career was honored with the Diamond Dagger from the CWA in 2018.

Gregg Hurwitz is the New York Times, #1 internationally bestselling author of 22 thrillers, including the ORPHAN X series, and two award-winning thriller novels for teens. His novels have won numerous literary awards, graced top ten lists, and have been published in 32 languages.

Gregg has written screenplays for or sold spec scripts to many of the major studios (including THE BOOK OF HENRY), and written, developed, and produced television for various networks. He is also a New York Times bestselling comic book writer, having penned stories for Marvel (Wolverine, Punisher) and DC (Batman, Penguin). He has published numerous academic articles on Shakespeare, taught fiction writing in the USC English Department, and guest lectured for UCLA, and for Harvard in the United States and internationally. In the course of researching his thrillers, he has sneaked onto demolition ranges with Navy SEALs, swum with sharks in the Galápagos, and gone undercover into mind-control cults.

Additionally, Gregg is actively working to end polarization in politics and on college campuses. His editorial pieces have appeared in The Wall Street Journal, The Guardian, The Huffington Post, and others.

From the #1 bestselling author of the Harry Bosch and Lincoln Lawyer series -- an electrifying standalone thriller that breaks all the rules! With an introduction by Stephen King.

Who is Orphan X?

The Nowhere Man is a legendary figure spoken about only in whispers. It’s said that when he’s reached by the truly desperate and deserving, the Nowhere Man can and will do anything to protect and save them. But he’s not merely a legend.